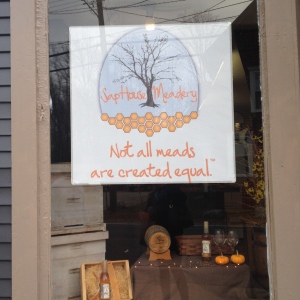 Mark and I recently went to the Sap House Meadery, located in Center Ossipee, New Hampshire. There, we were greeted by Matt, one of the owners. We had a nice tasting, followed by a tour of their production room. 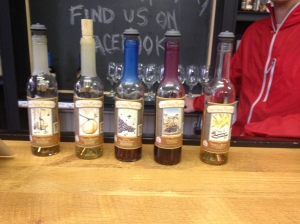 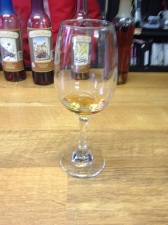 Sugar Maple: 13.8% ABV. Not too sweet, good balance. Both Mark and I were pleasantly surprised by the level of sweetness.

Peach Maple: 14.6% ABV A little drier than the Sugar Maple. This mead was also aged in American Oak for 8 months, which adds a little bit of complexity 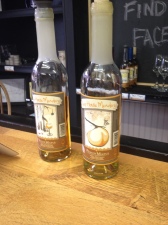 Hopped Blueberry Maple: 14.6% ABV. Were told that this was the mead for the beer drinker. The hops added a nice flavor to the mead, and no one flavor pushed around the other. Honey,  blueberry with a touch of maple with hops to balance.

Vanilla Bean: 18% ABV. This is the only one that I wasn’t a huge fan of. It was still very good, and Mark enjoyed it. They use the baking bean, Indian, instead of Madagascar

Ossipioja: 14.2% ABV. The wine drinkers mead. They use Spanish grape juice, made from Tempranillo grapes, with honey. This was good and different!

After we finished the traditional tasting, and we were talking about different places we like to go, what we like to drink, etc, we tried the Sugar Maple again- this time after it had been aged in an American Oak Cask. This was very good, and added a slight whiskey flavor to it. The meadery sells small casks for people to age their mead at home. They also have their casks at a few different establishments and noted that the flavor changes as it ages. You could go one week and the next and have something that tastes very different. 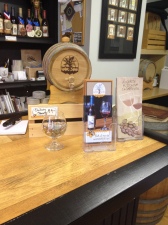 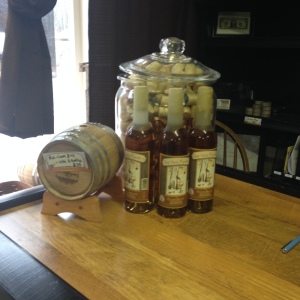 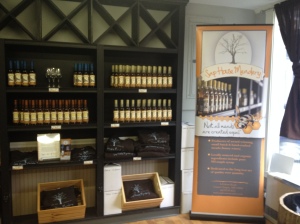 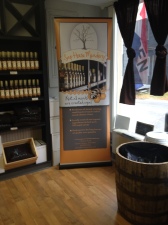 One of the very cool things about Sap House Meadery is that they use New Hampshire Maple syrup in a lot of their meads. They focus on using local ingredients in all of their meads, and make mead in the traditional way. When they heat the mead, they do not heat it over 90 degrees Fahrenheit in order to maintain the delicate flavors. Other mead producers do boil their mead, as it the stabilization process go faster. Sap House Meadery takes between 6 months and a year to produce a batch, as they would prefer it to be a better quality and self stabilize.

When you visit, you are able to tour their facility. At this time, they are operating in one large room, with fermenting tanks lined up all around. During our tour, we were told about the process of making mead- mix honey, water, flavors (fruit, etc) and yeast together. The type of yeast varies depending on what you want the final product to be; Champagne yeast for the vanilla mead, German yeast for blueberry and yeast made from the grapes they use for their Ossipioja mead. The cooler you can bring the mead down to ferment, the smoother the mead becomes. After the mead ferments for 8-10 weeks, you can drink it but it is harsh. Time is necessary for the flavor to fully develop. During the fermentation process, fresh ingredients are added to make the flavor layered. 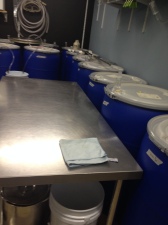 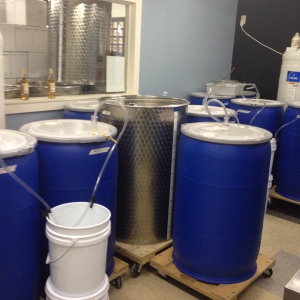 Everything at the meadery is done by hand. The mead is bottled by hand, labeled by hand and then dipped in beeswax by hand. They were initially going to use a foil top, but, if they were to have one without grapes on it, they would have needed to order half a million! Wax creates a nice touch. The color of the wax depends on the color of the mead and the label.

Looking to visit? They are open Saturdays and Sundays from 1-5. 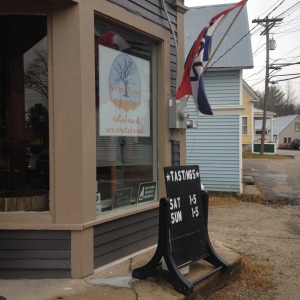 Oh, and by the way… they are award winners as well: 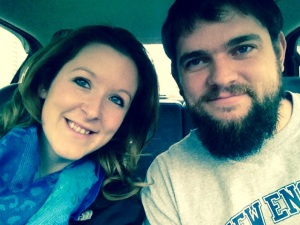 Megan & Mark, after having a good time at the Sap House Meadery 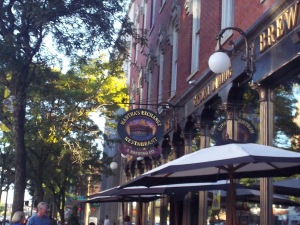 We went to Martha’s Exchange  located in Nashua, NH for a quick bite after going to Anheuser- Busch in Merrimack, NH with Jason and Maureen. It was relatively close by, so going there for food made a lot of sense. Seeing that it was a brewpub, we had to try some beer while we were there. It was a nice fall afternoon, so we took advantage of the weather and sat outside. The outside seating area was part sidewalk, part in an alleyway. 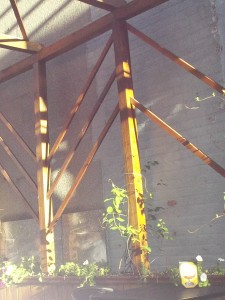 The inside seating areas all had white linen tablecloths. 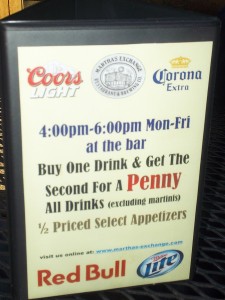 Prior to ordering, we noticed a sign on the table that said that some appetizers were half price and drinks were buy one get one for a penny until six pm. We asked if the sampler was included in the B1G1, and the waitress thought so, so we ordered two- one for Jason and Maureen and one for Mark and I. We also ordered buffalo chicken fingers and nachos. We found out a few minutes later that the sampler was not included, but the glasses were 4 ounce pours, so that was ok. 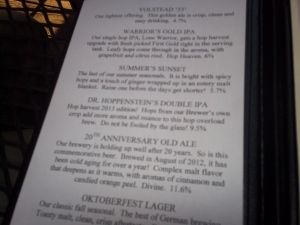 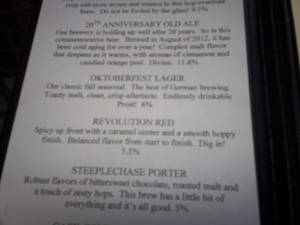 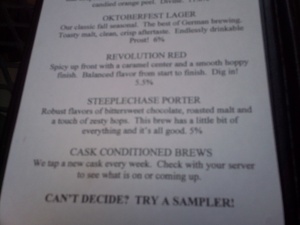 Volstead 33′: good, familiart flavor. Someone commented that it reminded them of a Harpoon beer

Maureen said it was too hoppy for her.

Jason and Mark enjoyed it, said it was fine, that it taste like beer.

Jason, Mark and I thought it was good

Maureen said it wasn’t too bad

Dr. Hoppenstein: a Double IPA. Good first taste, but I felt it had a medicine like finish.

Jason, Mark and I enjoyed.

Revolution Red: Mark and Jason said it was alright. I thought it had a mediocre taste.

Steeplechase Porter: Jason gave it a thumbs up, Mark thought it was a light porter.

I thought it was a good porter.

Maureen thought it was disgusting. 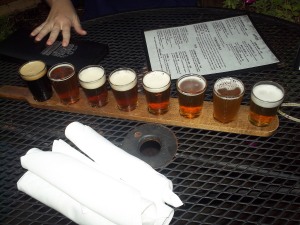 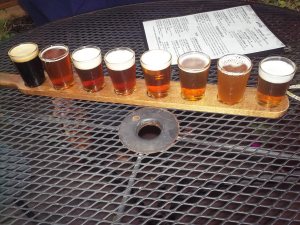 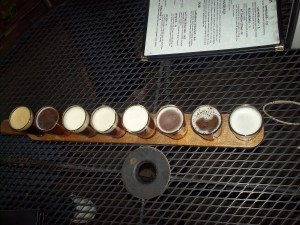 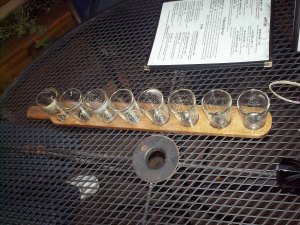 Where did our beer go?

After our tasting, we each ordered a drink. Maureen didn’t find a beer she liked, so she got a Washington State Riesling- Chateau ste Michelle Reisling. Jason, Mark and I all ordered the 20th Anniversary Old Ale (times 2!). 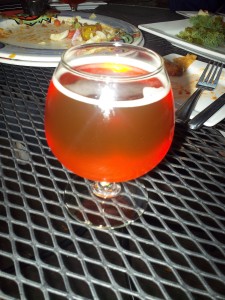 For the B1G1 for a penny deal, it was per person, not total across the check, so we had to enjoy more than one (with that Ale percentage, it was good that Maureen was driving us home!). 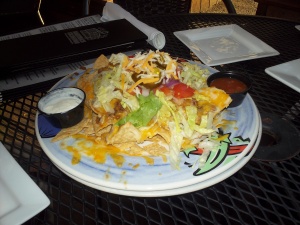 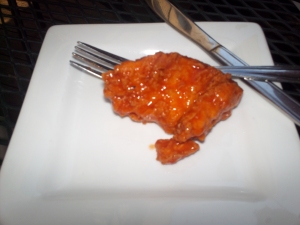 Before heading out, Maureen and I stopped at the candy counter inside the restaurant. Yummy and a good addition to the meal. 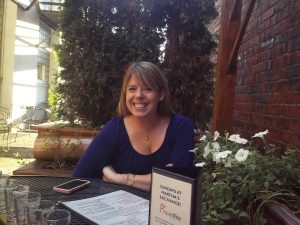 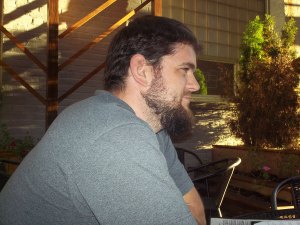