Eagle Brook Saloon is located in Norfolk, MA. They have been open since 1981, before brew pubs were cool, and have been run by the same owners since then.

We visited recently with Mark’s mom, Sheila, for dinner and drinks.

Unfortunately they don’t do flights, so we only tried 3 beers. They also don’t do Growlers, the beer is for on-site consumption only. We have been here before and had several of their pizzas and their Blueberry Ale. The Blueberry Ale is well known and is actually their best seller. They put blueberries in the cup when they pour the beer.

Everyone agreed it was a good summer beer, good taste, not too light though. Sheila said it had a heavier feel than Sam Summer, also had a good smell.

It wasn’t as hoppy as Mark was expecting, they describe it as a light body, hoppy aroma style. Sheila liked it, could drink it, unlike a lot of the the other ‘weird beers’ we have here try. Megan got hints caramel.

Megan thought it taste like and amber, it was a little too strong for Sheila. Mark liked it, hoppy, good flavor with a little something extra.

‘Ale with an attitude’ This is a highly hopped, very strong version of the traditional English ‘Bitter’. Clean, crisp with a copper color and very dry finish.

Sheila had ordered a Sam Summer, and was happy with her choice, until she tried the Baggy Knees Light and the Paint Pony Pale Ale! Now her Sam Summer seemed too light and not quite as flavorful.

They have the best deal around- order any small pizza, get a small cheese pizza free! Dine in Only, after 5 pm The pizza is typical bar pizza, but has some interesting flavors, including Chicken Caesar (and yes- it’s good!).

We ordered a Chicken Parm pizza, and got the cheese free for an appetizer. 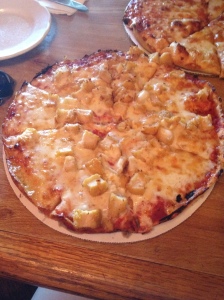 Not too much sauce, good amount of chicken, was spread out well, nice and cheesy. 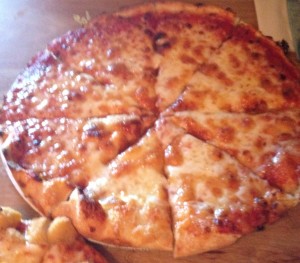 Mark ordered the Fish Taco, which was a Thursday night special. Very good, tons of fish, the cole slaw lettuce mix was really good and added a lot of flavor to the taco. 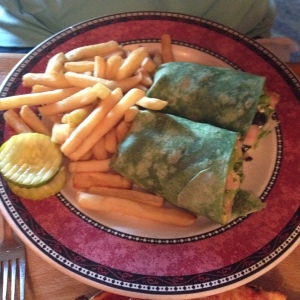 It was a good wrap, a little surprising that it had bannan peppers in it, Sheila picked most of them out. 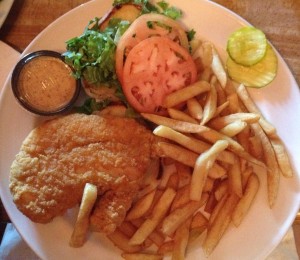 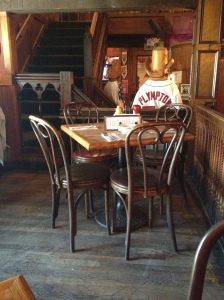 Definitely has a saloon feel to it, dark wood, exposed beams, good atmosphere.