We were lucky to go to Boston Event Guide’s Fall Beer Fest in November. They had three sessions; we went to the 12:00-2:30pm session.
We also had two pairs of tickets to give out to our readers- thank you to everyone that entered!
We hope that those of you that went had a great time!

The Boston Event Guide prides themselves for being the leading resource for the best events in Boston. It was started in 1995 by Jeff Popkin to connect young professionals with events occuring across the city. He had been hearing about events AFTER they happened, instead of knowing first hand that they were happening. The Boston Event Guide also sends out a weekly newsletter to it’s members (membership is FREE) about what’s going on, what social events and netowkring events are approaching, and any great deals. 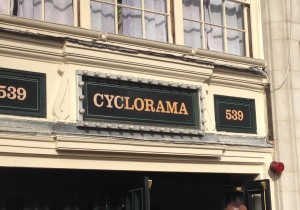 The Fall Beer Fest was held at Cyclorama. The building was easy to find, however parking was not. Next time, we will definitely take the T in (the Boston area train).

When we arrived, we had our IDs checked outside, and then proceeded in.

After checking in, we each took a cup to use for the day, and were given a map of where we could find the beer.

map for the afternoon

Some of the many breweries present, and the beer we enjoyed…

Foolproof Brewing Company
Foolproof Brewing Company opened 2 years ago in Pawtucket, RhodeIsland.
Farmhouse Ale Saison was very good
Backyahd IPA was pretty standard but tasty
Raincloud was a robust porter, good, chocolate and coffee notes
We recently added Rhode Island to our travels, so we will be visiting Foolproof sometime in the future 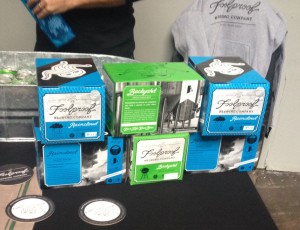 Finch’s Beer Company
Finch’s is located in Chicago, Illinois. They are beginning to expand into the Massachusetts and New England market.
We had the Hardcore Chimera (double IPA) and Cut Throat (Pale Ale). Both these beers were really good.
Keep your eye out for these beers, and others by Finch’s Beer Company. 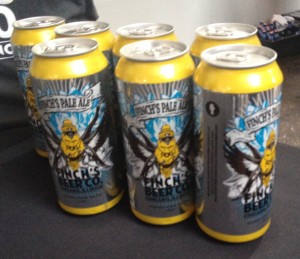 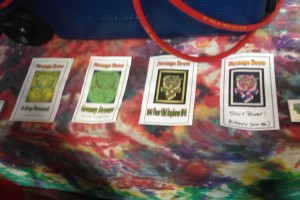 Strange Brew
Strange Brew is currently a beer and wine home brew supply store, that also offers classes. Rumor has it, they should be opening as a brewery sometime soon…
They had a lot of interesting beer flavors: 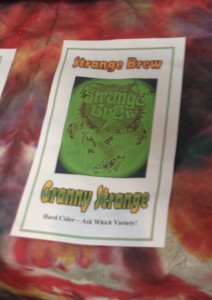 Granny Strange was a sour and/or tart cider. Good but very different flavor.

Sour Power, as they label it, is an extremely sour ale. A very interesting, very sour and tasty ale.

Downeast Cider
Very good traditional cider taste- as Megan says “it’s like getting a jug of cider, but it is alcoholic.”
We have had many family mebers and friends try this cider- and no one has disliked it. In fact, it it now the favorite of many!
We just visited here, look for our post coming soon.

Spiked Seltzer
This was a different take on beer. They brew it like a lager, but it drinks like flavored seltzer, despite being 6% alcohol! Spiked Seltzer is all natural and has low sugar, low carbs and is gluten free. They had lime, orange, and grapefruit flavors available to try.

All the flavors were pretty good, grapefruit was subtle and the orange tasted like orange soda. Megan can’t wait until they are all over New England, so she can pick up a six pack! Want to see if they are available near you? Check here

Redhook and Kona
They were both there. We tried the Winter Hook because we’ve had their other beers plenty of times. The Winter Hook is a super hoppy ale with dark malts.

Goose Island
We tried their IPA and Festivity Ale.
There’s no doubt they are a craft beer maker, but now they are owned by Inbev, owner of Anheuser-Busch. They like it, they can get what they need when they need it, they have the support of a company that has some pull. 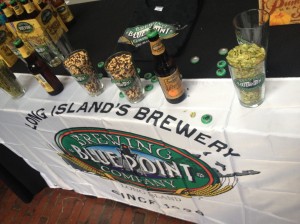 Blue Point Brewing Company
Our options were their toasted lager (which is their flagship beer), and a pumpkin ale, which was good- not overly spiced so you could taste the pumpkin 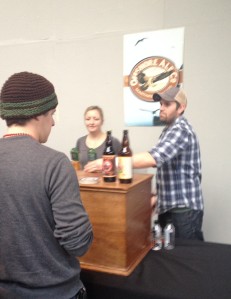 Off Shore Ale Company
One of the many breweries in Massachusetts that we haven’t been able to visit yet- this one is on Martha’s Vineyard.
They had their Beach Road Nut Brown Ale and Hop Goddess.

All of the beers we tried here were good. They had their Black Lager, Yard Sale, Double IPA, and Session IPA. Our only fault with them? We would have to go to Salt Lake City to visit! 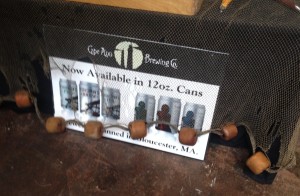 Cape Ann Brewing Company
They brought a fair selection. We both liked the Fisherman’s Brew, but the Pilsner we did not like that much.
If you are interested in visiting Cape Ann Brewery in Gloucester, check out our post about our visit there.

Ballantine
They just relaunched the brewery after being closed for 10 years. They have been around for a long time, in the 40’s and 50’s the were sponsoring the Yankee’s, they were the 4th largest brewery back then. Now the only beer they make is the Ballantine IPA which was a pretty good, fairly standard IPA. 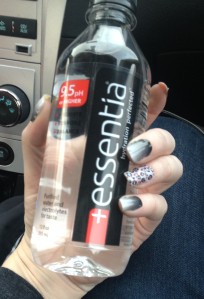 They were giving out free waters, which was great- always a good idea to hydrate during and after drinking! This water has a pH level of 9.5, to help keep you hydrated 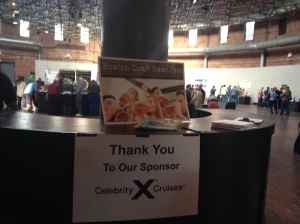 We thought the beer fest was good, and different in a good way. The event space fit it well- and allowed for you to walk around without bumping into others. We also liked that we had the opportunity to speak with the brewery representatives at many of the tables. Many tastings/festivals you want to ask questions, but really aren’t allowed to because the focus is to push everyone through the line. Here, the focus was fun and education when wanted.

Interested in going to one of these events, or something else by the Boston Event Guide? Be sure to sign up for their newsletter list to stay updated!

Ready to go drinking? Their Spring Craft Beer Fest 2015 is right around the corner- April 12th.
Tickets are $69. but you can buy them for $19 through December 31st! It looks like an event you can’t miss!

While at the beer fest, we ran into a few co-workers of Megan. They had taken a bus to the event, which was such a great idea!
Group photo, post beer fest!

One thought on “Fall Beer Fest, by the Boston Event Guide, Boston MA”