We stopped at RiverWalk Brewing Company on one of our many drives between NH and Massachusetts. They are located in Newburyport, MA right down the road from Newburyport Brewing Company, so we stopped there for a Growler refill as well.

Bre and Deryl met us at the brewery. The RiverWalk website says: While we are influenced by the proudly independent spirit of Belgian farmhouse breweries and the warm atmosphere of English country pubs, our philosophy is uniquely American. We draw inspiration not from a particular style or set of guidelines, but from the incredible richness of the world around us and the character of the ingredients that we carefully choose.

Growlers being filled out back.

Bre and Daryl at the bar

They have a fairly small tasting room, a bar with 6 stools but room for standing as well. 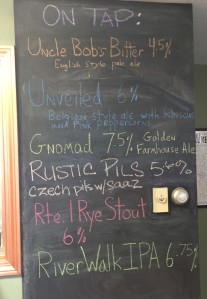 Rustic Pils – 5.6%
Better than the average Pilsner, still not Mark’s favorite, but had a decent taste. 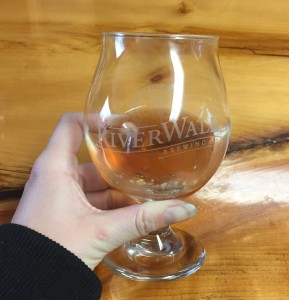 Unveiled – 6%
Very interesting flavor, not very carbonated. Megan thought it was sweet, Mark did not. There is an extra flavor, Hibiscus or peppercorn flavor, not sure which, and a touch floral. It is a Belgian style ale with hibiscus and pink peppercorn.

Gnomad – 7.5%
They use 2 yeast strains and 2 malts. A Belgian base, slightly tart or sour, fairly light body. A hybrid beer, hard to describe all the flavors, does not taste like 7.5%. Spicy, earthy notes of banana and clove.

Rt. 1 Rye Stout – 6% limited release
Interesting balance of flavors, lighter style stout, maybe because of the Rye. Coffee flavor, Megan likes it, Deryl and Bre did not like, they do not like coffee.

Riverwalk IPA – 6.75%
Interestingly balanced, right in the middle of IPA spectrum, hoppy but not super hoppy, not plain or boring either though.

The service was good. We did not get anything to go, though Bre did get a small Growler. Unfortunately, on the website they say they bottle condition their beer and have pictures of beer bottles on the website and Facebook and we were looking forward to that. We have way too many growlers! When we were there they told us they were not currently bottling beer. According to facebook, they are now bottling again, about a month later.

This is definitely a brewery to keep an eye on!