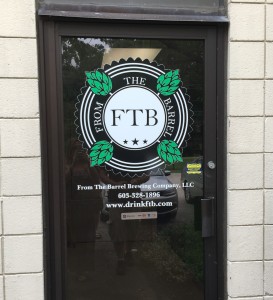 We have heard good things about From the Barrel so we went to check it out for ourselves. They have been open for just over a year and just had their one year celebration. They are a nano brewery, creating small batches of each beer. Luckily they had some of the Anniversary DIPA leftover for us to try.

They sell a flight of four 4 oz tasters for $5. They also sell single tasters, so we tried all 6 beers that they had on tap that day.

Lily IPA – Double Dry Hopped – 7.5%
A strong citrusy hop smell, with a lighter hop flavor than aroma. The hop flavor mixed with malts made for a well balanced IPA with tropical notes.

Anniversary DIPA – 8%
Another well balanced IPA, not an overly hoppy taste but a little more hop flavor than than the Lily. Made with Columbus and Citra hops.

These first two were Mark’s favorite of the IPA’s/DIPA’s. If they had bottles of either of these in stock he would have bought a few.

Big Elle – 10.5%
We didn’t like this as much, as it had more of a bitter hop taste. I think everyone with us liked Lily and the Anniversary Double better. 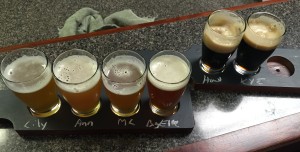 Know Your Enemy – Russian Imperial Stout – 10.2%
Heavy flavor, a touch sweet. We liked the Howl a little bit better, but Stephanie (visiting with us) liked this one more.

Both the owners were there when we arrived. We were served mostly by the head brewer. He answered questions about the beers and chatted with us. He told us he named most of the beers after his family, his daughter, sister, Mom, and wife.

We were visiting with a small group of friends that day.

Mark’s brother Jason and sister in law Maureen were there.

Ian and Stephanie enjoying their beers. 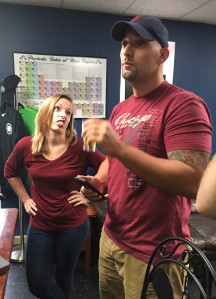 They have cool glasses for sale as well.

One thought on “From the Barrel, Londonderry, NH”