While we were up camping and tubing on the Saco River, we decided to visit Saco River Brewing Company, what a surprise! They opened just over a year ago, in July 2016, in Fryeburg, ME. They are located in a building or two out behind a restaurant with a decent amount of parking.

They do 4 oz pours and full pints. We ordered a 4oz pour of each beer so we could try all 7 beers they had on tap.

D.O.T. Special – Czech Pilsner     5%
Has a strong pilsner/lager taste. Strong additional flavors added by the spicy saaz hops. Not bad for a pilsner, which is neither of our favorite styles.

Driftwood IPA – American IPA     6.5%
Pours super clear. Does have a malt presence but the hops balance that well and add a good amount of hop flavor to it. Good, not Marks favor style IPA but it’s pretty good and worth a try for IPA drinkers.

Flip Flop IPA      6.7%
Marks immediate reaction “oohhh this is good”. Pours super hazy, you can’t see through it, a definite  New England style IPA. No malt character, all hops, on the herbal/grassy but still super tasty.

Sweet Fern Saison     4.5%
Good, easy to drink Saison while still having flavor, spicy and citrus notes. On the lighter side for a saison. 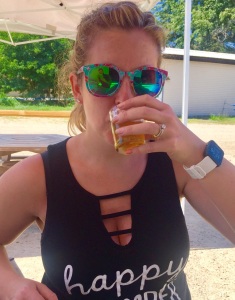 Buck Brown Ale     5.4%
Megan said it had an almost a dull coffee flavor, but in a good way, not an overly bitter coffee taste.

Old Colony Porter     6.5%
Sweet and roasty. Light body for the style, but more roasted here than the Buck Brown Ale. 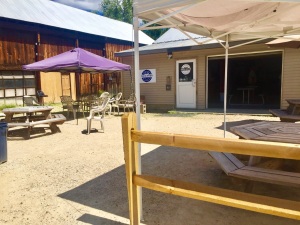 We sat outside to have our samples, it was a pretty nice day. They have several picnic tables with umbrellas and pop up tents for shade.

They have a fairly small bar area, but another decent sized room off of that with a ping pong table, shown above, and their outdoor space, so they have plenty of seating.

Mark at the bar. There is a whole wall of glass behind the bar so you can see everything happening in the brewery, shown below, not much happening on a Sunday afternoon though. 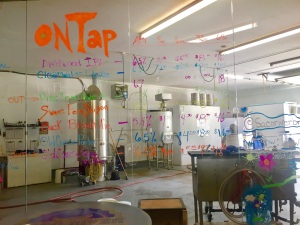 They have a cool, custom made cement bar with
the river built into it, cool details.

This was a nice visit. They are doing well for only being open a year.  It was better than we expected, as we went in assuming it was a “tourist trap.” However, it seems to be a nice combo of tourists and locals based on the amount of growlers we saw being filled.

Check Facebook for hours, we assume
they change with the seasons.