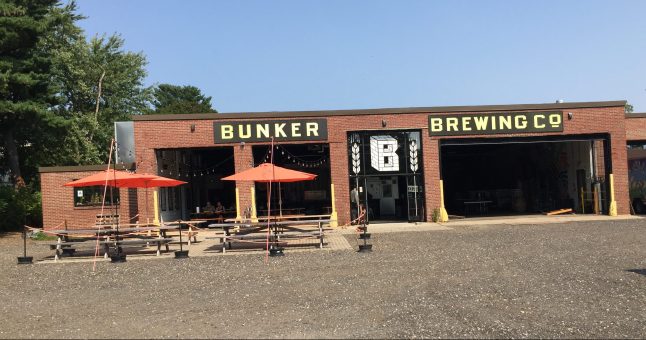 On our trip to Portland, Maine near the end of the summer we visited Bunker Brewing with Megan’s sister Sam and her boyfriend Dustin. None of us had been there before, or had any of their beers.

Bunker opened in 2011. They were in a tiny brick building and built a following. They were ready to expand and did so in 2016. They moved across town to their new facility and tripled their output of beer. They were able to keep their unique brick logo, and style, by moving into another industrial brick building.

They have a pretty big tasting room with a long bar
and a bunch of picnic tables inside. 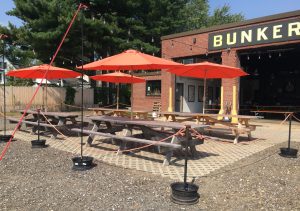 They also have 4 picnic tables and umbrellas for outdoor seating. It was a little warm and sunny the day we were there so we sat inside. 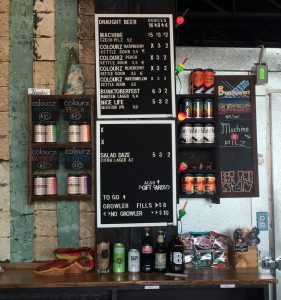 They have 4oz, 8 oz, and some 16 oz pours available. Between all of us we tried most of the samples available. We went with with a flight of 4 oz beers each.

Bunktoberfest – marzen lager     6.4%
A good fall beer, had the festbier type of flavor, a little hard to describe, malty but easy drinking, pretty good beer for the style.

Nice Life – session ipa     5%
Decent for a session ipa, mild hops on the grassy side and a touch bitter.

Salad Daze – citra lager     4.7%
Smells super citrusy and tropical, taste is a little more bitter than the smell would lead you to believe. Has a smooth lager finish,ok but not great. 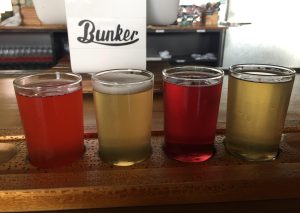 They had a whole series kettle soured beers, Colourz, available while we were there. We believe those are summer seasonal beers. Overall, we were happy with the Colourz series, as they were made with fruit instead of syrup and it was noticeable. 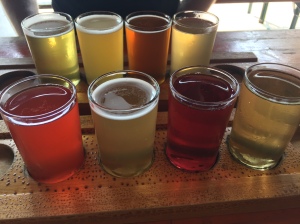 Colourz – watermelon
Tart with a really good watermelon flavor. This is a hard flavor to get but they did really well. This was our favorite of the Colourz series.

They had some cool decor. There was cool (old we assume) tin panels behind the bar and on the columns. They have growlers to go as well as most of their beer canned, mostly 12 oz cans, some in 4 packs and some in 6 packs, but a few 16 oz cans in 4 packs as well. 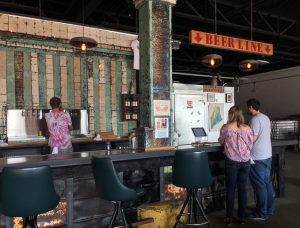 Sam and Dustin near the bar, buying some beer….

They went with the Colourz Watermelon.

We went on a little brewery hopping trip in Portland, Maine near the end of the summer. We were with Megan’s sister Sam and her boyfriend Dustin. We went to some places we hadn’t been before, and Sam and Dustin wanted to visit Sea Dog. We visited the South Portland location, which is definitely outside the downtown Portland are.

Sea Dog opened in 1993 with a single location in Camden, Maine. Sea Dog is now owned by the two men who own Shipyard Brewing Company. We thought this was an interesting description, not owned by Shipyard but owned by the owners of Shipyard. 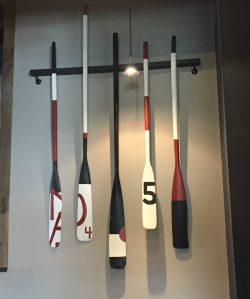 On their website they say: Our beers are brewed in a traditional English style using only the highest quality ingredients like English two-row malted barley and British top-fermenting Ringwood yeast. Our English brewing results in brews with a distinctive, refreshing taste and crisp finish.

Each couple got a flight of beers to share, you can pick
your own. Either 6 or 10 beers, we both got 6.

Bluepaw Wild Blueberry Ale     4.6%
Very, very light beer with a blueberry flavor. A wheat ale base, we all agreed it had a good blueberry flavor, natural and not syrupy.

Raspberry Ale     4.5%
Not quite as good as the blueberry but pretty decent. A light wheat ale with raspberry flavor. 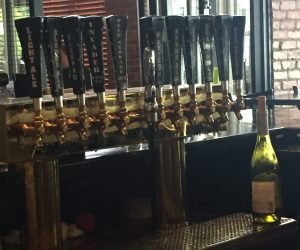 Old Gollywobbler Brown Ale     4%
Clear but copper colored. The sweetness stands out the most, described as ‘rich and malty’ but we didn’t get that, a mild, sessionable, sweet brown ale.

Hazelnut Porter     5.6%
Bitter barley flavor, dark, a little roasty, not much nuttiness. Did not quite match the description or what we were hoping for.

We were actually impressed with most of the beers. They do a good job
with the light, fruity beers. It was better than we were expecting.

We visited Bone Up Brewing Company in Everett, Ma. They are located in the same neighborhood as Night Shift, which we went back to visit while in the area.

The husband-wife team of Bone Up Brewing started brewing at their location May 2016, after a long renovation process. They describe their beers as ‘American brewing with a Belgian accent’. Their tagline is ‘made from ingredients’ so their is a little bit of sass there.

It turns out the day we visited they were celebrating their 1 year anniversary of opening the tasting room. We actually had to wait in line to get in. They had the whole parking lot roped off for the party. 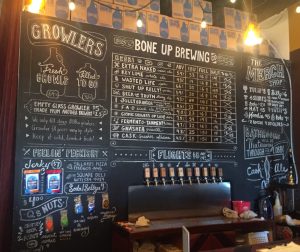 They serve full pours, half pours and flights of 4 beers for $8. We ordered flights, and they come with your choice of a small snack.

Key Lime – white ale     4.8%
A light beer with a strong key lime flavor. They were going for maximum fruit flavor and got it, might have been a touch too much key lime for Mark, but pretty good for Megan.

Jollybringer – tripel aged in triple sec barrels      8.6%
Mild Belgian taste, fairly sweet with a touch of heat on the backend. It left a little to be desired.

Cosmic Showers of Love – dipa     7.5%
Smells fruity, has a mild hop character, a little bit malty with a touch of sweetness. It smelled better than it tasted unfortunately. 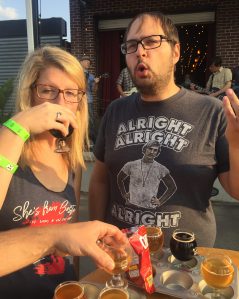 Gnasher – grisette     4.8%
Light, a slight peppery taste to it, mild overall but true to style. 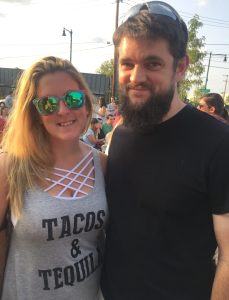 Their tasting room is pretty small, a long bar with a few small tables. It was crowded when we were there, but they did a good job serving everyone. We went outside to have our beers.

Dustin and Sam enjoying their beers.

Sam insisted on taking Megan’s phone and
taking pictures, so we used them!

We recently visited Mystic Brewery with Megan’s sister Sam and Sam’s boyfriend Dustin. We have only had 1 beer from Mystic before, it as good, and we’ll get into that later.

Mystic is located in Chelsea, MA and have their own parking lot, which is always a plus, especially in a city. According to their website:

Mystic Brewery is a brewery specializing in farmhouse-style
ales utilizing locally sourced yeast and other ingredients. Drawing on historical methods, our increased focus on fermentation allows us to impart a sense of unique
New England terroir into all of our beer.

They have a pretty big bar and a big tasting room with picnic tables and plenty of standing room. They serve flights of 4 beers, full pours, and have bottles for consumption on premise. Mark got a flight, Sam and Dustin shared a flight, and Megan got a sample and full pour. 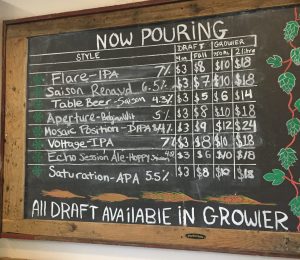 Flare – ipa     7%
Supposed to be a ‘juicy, cloudy’ ipa. It had an odd bitterness, not very juicy and not quite enough body to it.

Mosaic Position – dipa    8.4%
Smells super hoppy, pretty smooth, cloudy, not quite as hoppy as it smells but pretty tasty.

Voltage – ipa     7%
The best ipa Mark thought. Cloudy, juicy, not that much body to it, maybe they don’t use as many oats in their neipa’s,  but a good beer. 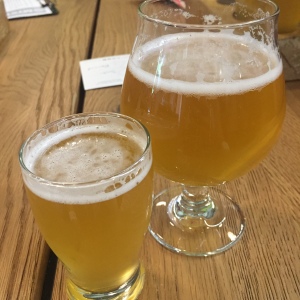 Wild Field Beer – saison with Brett
Megan liked this beer, good thing because she got a full pour of it! Mark was hoping for a little more sourness from it, it had more of a funky tartness, typical of Brett.

We had a little trouble deciding what to order, with flights, full pours and bottles available. Mark wanted to try the ipa’s, but overall they were just ok. Since they focus farmhouse styles and have some other styles, maybe we should have tried some of their other beers. A lot of the bottles they had available sounded interesting, but we were both driving so we could not indulge too much. 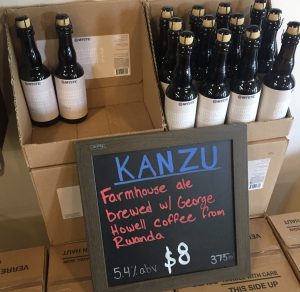 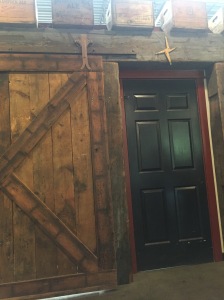 There is a lot of rustic wood and some really big beams
that give the tasting room a cool vibe. 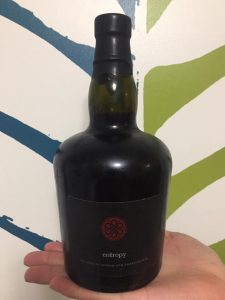 We drank this bottle of Entropy at home, Megan got it as a Christmas gift. Bottled in 2014, it is uncarbonated, on purpose, a”still” ale, aged in French and American oak, and was 14.2% !

This is the most complicated beer Mystic Brewery makes. entropy is fermented in four stages, with four different yeasts. A house Trappist strain “brings out earthiness and dark fruit, amplified and rounded by a French white wine yeast.” A six-month fermentation with Sherry yeast follows, and the beer is completed with an English barleywine yeast.

It had a definite oaky flavor, with a hint of red wine. That’s what we tasted, a very complicated flavor  with scents of vanilla, sherry and almonds.