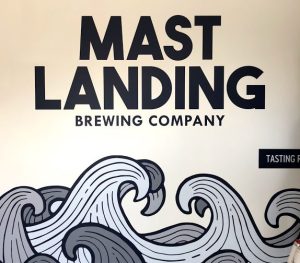 We visited Mast Landing company with some family this spring. This was the beginning of a long day of brewery hoping in Portland. Mast Landing Brewing Company is in Westbrook, ME, about 20 minutes outside of downtown Portland.

Mark was pretty excited to visit here, he had heard lots of good things about them. They got their start in Freeport, ME and that’s where their name, Mast Landing, came from. They moved and expanded into a full scale brewery at their current location in Westbrook in early 2015.

They do flights of 4, single 5 oz pours and 10 oz pours. We did a little bit of everything.

Dash – American IPA     7%
A good beer, on the piney side of hoppiness, hoppy through out with a hoppy finish.

Paper Plates: Strawberry Shortcake – Session IPA     4.5%
Smells like strawberry, and taste like strawberries and cream, but also an ipa. A really good, fruited ipa, everyone liked it.

Oh yea, we played Guess Who as well.

They have a pretty large tasting room with
some cool, rustic benches and tables. 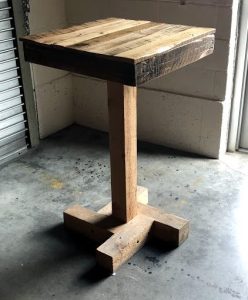 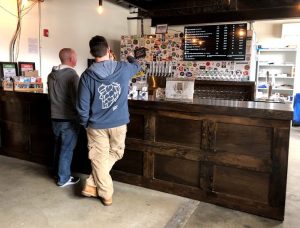 Cousin Tommy and Mark at the bar

You can see part of the brewery on the way in.

The tasting room was nice and the beer was good. We didn’t try everything, but the beer we had was good. And we know they brew a lot of limited release beer that Mark still wants to try.