During our visit at SoMe Brewing Company, we were asked if we had visited the Post Road Tavern in Ogunquit. We hadn’t, so we decided to go there for an early dinner and try their beer. 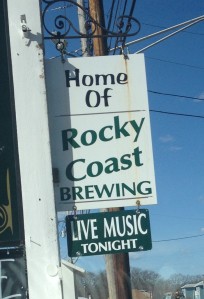 “Post Road Tavern is a restaurant providing high quality dinners at reasonable prices. We feature British selections mixed with American PRT Specialties. All of our food is freshly made. We also have a full service bar.
Rocky Coast Brewing creates craft Ales within the Post Road Tavern restaurant. It features hand crafted “pico” brews. If you want to know more about the Brewery ask for Jim or Tom.”

From Mark’s memory – Wasn’t particularly attractive outside, just kind of a generic look. Service was good, beers were good. Beers were interesting but not too crazy. Seems like it would be a good place for people visiting on vacation, but should keep local residents happy as well.

They did not have a sampler tray, so we ordered a few pints and tried each one, unfortunately did not get to try all the beers on tap.

The Duke Coffee Milk Stout – 4.2%
Definitely a heavy flavored beer. Mark thought it had more of a coffee taste, Megan got more of a traditional stout taste. Either way, it was pretty good.

Noldernbrau Rye-Pilsner
An odd taste, kind of hard to place. Maybe a heavy rye taste with a light pilsner taste? It was a little sour, but toned itself down. Unfiltered. 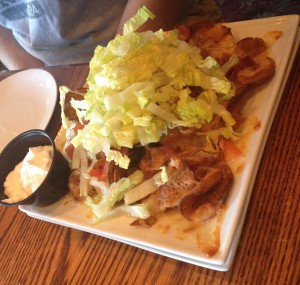 Pub Crisps were good, loaded with bacon, cheese lettuce and tomato as well.

We ordered wings as well. Both types of wings seemed to be cooked first, they were crispy, and then tossed in sauce. Sauces were pretty good though.

Parmesan and garlic wings had a white garlic sauce, with shredded Parmesan on top, which was interesting and good! 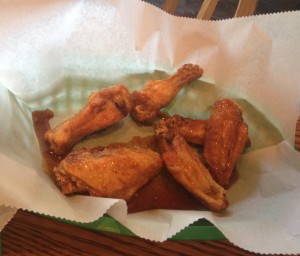 Service was very good, the waitress was attentive.

view of the fermentation area from the restaurant area- even if the brewer isn’t around, you are able to peak in the windows and see most of the brewery, which is nice.

Before we left, we were able to have a quick tour of the 3 and a half barrel brewery. It is on the small side, but the brewer is very passionate about his brewing. 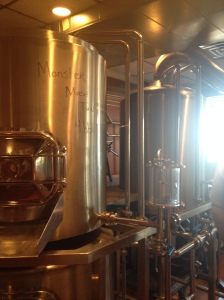