We visited the 1620 Wine Bar in Plymouth, MA with Megan’s sisters, boyfriends, and a few cousins back in November.

1620 is a reference to the year that Plymouth, MA was first settled. We visited the ‘Bar’ location that is in the downtown Plymouth, in the same plaza where the old Plymouth Winery tasting room was. They also have the ‘winery’ location where the wine is made that also is their function area for weddings, and also tastings on the weekends.

We had a pretty big group and they were nice enough to put 2 tables together so we could all sit at 1 table.

They sell wine by the glass, the bottle, or a flight of 3. They also have some local beers on tap as well as mixed drinks. 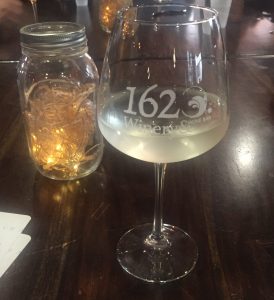 Apple Blossom
A sweet wine that is also spiced. It was ok, but Mark thought the spices actually detract from the wine, it would have been better as a plain, sweet wine.

Megan and Jess both ordered a flight of 3 small pours of wine.

Billington’s Blend
Dry with a hint of cranberry, also notes of black currant, cedar, and green bell pepper. A nice, dry flavor with a good mouthfeel.

Syrah
Hints of blackberry, plum, chocolate and pepper. Jess thought it was very good, Jenn liked it but thought it needed to be paired with food, a savory dish.

Apple Crumble
Megan, Jenn and Jess all liked this, like drinking apples, with vanilla, cinnamon and caramel. 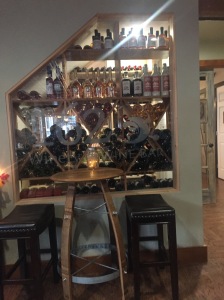 Everyone liked the wine they got for the most part, we didn’t get extensive notes from everyone there. It was a little pricey but not too bad. The place was pretty fancy and had a nice vibe inside.

They have a pretty decent sized deck that you can see the water from as well. A little too cold to sit out there in November though.

And toys for Richard

The whole group, almost everyone smiling!