We recently visited Litherman’s Limited Brewery in Concord, NH. They opened in April of 2016 and have been busy ever since. We had heard good things about their Saisons, but they had quite a few ipa’s on tap as well.

They are located in the back of an industrial park, luckily they had a sign out front with directions, very helpful!

The owners met and bonded over music, and ended up recording hip hop tracks together. Somehow that transitioned into making beer, and the tasting room has a definite music feel too it, and so do a lot of their beer names.

The stools have records on them, and they have posters of their beer labels up on the wall which is fun.

And classic albums mounted on the walls.

They had 10 beers on tap, so Mark and Megan split a flight, so did Sammie and Dustin.

Little Miss Strange – dipa
Dry, more subtle flavors than the description, mild orange and pineapple, not quite a juice bomb, but pretty good. 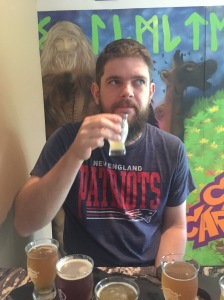 Simply Red Ale
Described as ‘big, chewy, malty, slightly sweet’ and that was right on. Not Mark’s favorite style of beer but they did a good job with this beer, Megan liked it.

Orange Crushable – belgian orange ipa
An ipa with a super orange flavor too it, interesting (in a good way).

Chakra Khan – saison with lotus root
This was a pretty tasty saison, all 4 of us liked it, dry hopped with Citra.

Tangled Up in Bruges – ever evolving saison
They use seasonal ingredients in this saison. Strong saison flavor with a little bit of funk.

Milli Banilli – banana vanilla porter
A porter with banana, and interesting mix of flavor and style.

Last Mango in Concord – mango green tea blonde ale
Tea and mango, with some sweetness, stand out in this beer.

Dustin read us a story

They had cool marble tables and a marble bar 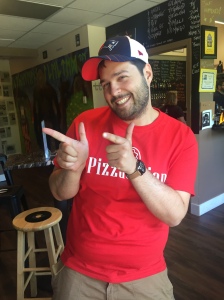 Dustin being a goof 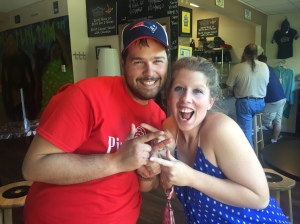 Dustin and Sammie being goofy together

Favorite beer names: Bow Wow Yippie Yo and The Ol’ Dirty Dipa,  neither were on tap when we were there. They mostly fill growlers, but occasionally bottle some batches of their beer.