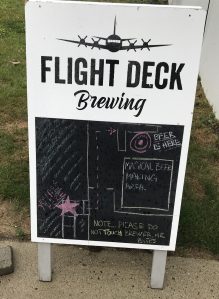 We visited Flight Deck Brewing when we were camping in the area. They are not too far away from Maine Beer Company, which we also just visited for the first time. 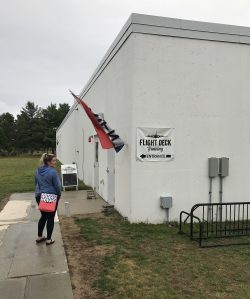 Flight Deck opened in early 2017 in Brunswick, ME. They are located in Brunswick Landing, which was formerly the Brunswick Naval Air Station but is being redeveloped for private business use. Flight Deck uses airplanes to influence their beer names, and of course their brewery name.

Back of the building, with no windows

The building they are in was originally built as a small arms range, and has 12″ bullet proof walls. They had to cut all the doors and windows into this place, it was just a solid concrete box. The did reuse some of the pieces they cut out of the walls on their walkway and in their patio area.

They do full pours as well as flights, so we ordered 2 flights to try most of the beers.

Stay the Course – new england ipa     5.9%
Mark was not a fan, not what he was expecting for a neipa. Bitter and grapefruit is what stood out, probably based on their choice of hops, but not the typical juicy neipa Mark was looking for.

Victory Garden – Strawberry Rhubarb Pale Ale     4.5%
Tastes like strawberry and rhubarb. A nice, easy drinking summer beer, which is what they were shooting for, and achieved. 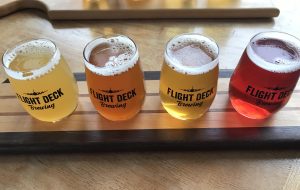 Breaking the Sour Barrier – rosemary mint sour      7.5%
We were unsure about this before we tried it, but we did like it. The flavors work because nothing over powers the other, each flavor is subtle but present and makes for and interesting but easy to drink sour.

Flying Fokker – berliner weisse     3.4%
A little bit sour but not too much. Decent, but could benefit from some fruit, as every plain Berliner Weisse could, in our opinion.

Midcoast Mashup #1 – gose     3.9%
Megan thought there was a brief taste of ‘regular beer’ (pale ale) before the salt and sourness. It did not have the typical dry finish of a gose.

Subhunter – imperial ipa
Malty, hoppy and bitter, as expected for a 9.1% imperial ipa, described as drinkable, Mark wouldn’t quite say that but it was ok for what it was. 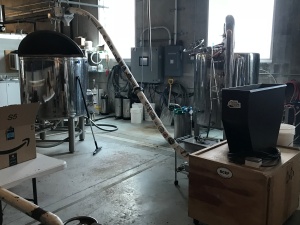 Brewery area that you walk by on your
way in, with Top Gun references. 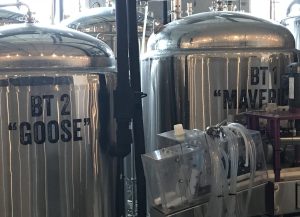 They have a small canning line, shown above. They were
only selling 4 packs so we didn’t get anything. If we could have done a mixed 4 pack we would have. 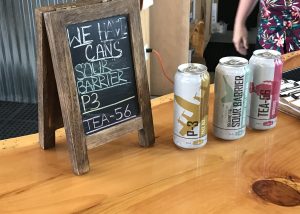 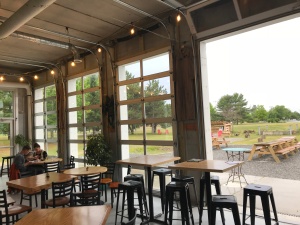 They have a pretty big tasting room, and lots of natural light from the doors and windows they cut in. They have a very large outdoor space, but it was overcast and rainy the day we were there.

Some of the large outdoor slabs they cut out
of the walls and used for the patio area.

Check Facebook for the most up to date hours

Large plane near the entrance to Brunswick Landing

Backyard Brewery and Kitchen is a fairly new brewpub in Manchester, NH. They opened in July of 2017 and have been getting pretty good reviews from what we have heard.

Backyard Brewery and Kitchen is a new venture to revitalize this very large restaurant space. The Yard restaurant was in this location since 1975. The owner wanted to modernize and update the restaurant. Two of his children are co-owners as well, they decided a brewpub was the way to go.

The restaurant is really big inside with plenty of space for functions. The bar and main restaurant area have all been updated, but one of the side rooms still has old chairs and furniture. The inside is decorated fairly rustic, with lots of fencing made to look like you are in a backyard. 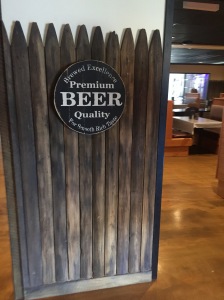 Since they are a restaurant they serve 4 oz tasters, half pints and full pints as well as flights. We all ordered a flight of 4 tasters, which was only $7. 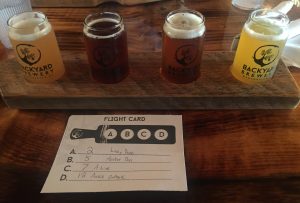 A – Line IPA – Classic IPA     7.5%
Fairly clear with a reddish tint. Hoppy as well as malty, with grapefruit and pine hoppy notes. Ok for a classic style ipa, but not really what Mark and Ian are looking for.

Aussie Oatback – DIPA     8.6%
A good beer, you definetely get the oats on the mouthfeel and gives it that haze. Not super hoppy for a DIPA, may be the Australian and New Zealand hops they used, very smooth at 8.6%

There She Gose – Gose     4.1%
It is sour but not much else to it. It has a decent base, needs more to it though, maybe make it a fruited Gose? There wasn’t that typical salty dry finish either. We thought it was lacking a little bit.

Novemberfest – German Festbier     6.3%
Darker than an Oktoberfest, but pretty smooth and easy drinking, malty with a decent amount of flavor. Pretty good.

We were there mid afternoon so we just got a few appetizers to split. The Trailer Pork Nachos, Smothered Pretzel Tots and Chicken Fingers were all good.

Deciduous Brewing Company opened in mid August of 2015. They are a ‘constantly striving, boutique brewery’ in Newmarket, NH. The brewery is co owned by Frank Zagami, his wife Maryann, and David Sakolsky. David is the head brewer at Deciduous, and formerly the head brewer at Blue Lobster. 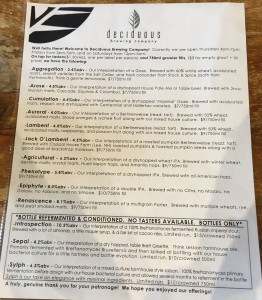 They do 4 oz tasters for $1.50 each, we tried all the beers they had on tap. While we were there, they had 3 beers in bottles that were unfortunately not available to taste. 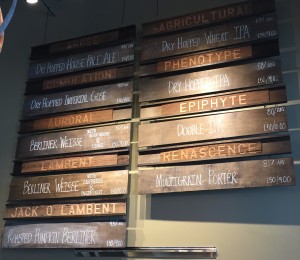 Gose – 60% white wheat
A little tartness, really light in body. The addition of salt gives it a dry mouthfeel.

Arose – 4.8%
A strong smell of hops, well balanced. Hop and malt flavors, not overly hoppy or bitter, their take on a house pale ale or table beer.

Cumulation – 4.5%
Dry hopped ‘imperial’ gose
Tart, light in body, Megan tasted the salt on her tongue, had a dry finish.

Auroral – 4%
Berlinerweisse 50% wheat with blood oranges and lychee fruit
Really tart, a sweeter sour flavor. Megan said it was like a sweet tart. This was a very good sour beer.

Lambent – 4%
Berlinerweisse 50% wheat with raspberries and passion fruit
Tastes less tart than the Auroral, more fruit flavor with a hint of tartness. Megan said it was juicy. 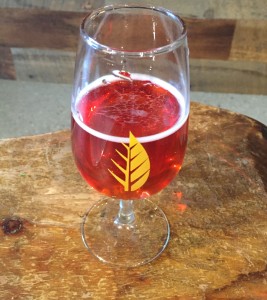 Phenotype – 5.8%
Dry hopped IPA
Smells of tropical fruit hops at first. Had a tropical hop flavor with a bitter finish. Bitterness takes over as the main flavor and kind of over powers the good hop flavors. 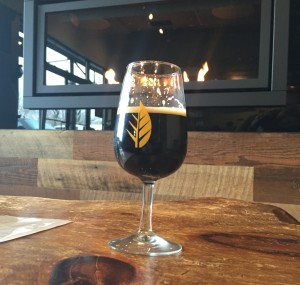 We decided to buy the Introspection bottle, even though we couldn’t sample it. It was very tasty, we shared it with friends who like RIS’s and they really liked it as well. 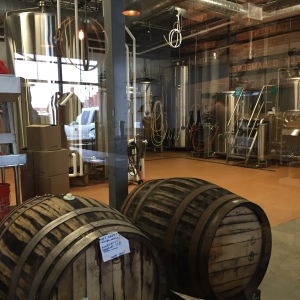 They do a lot of interesting styles of beer, which seems like where their strength is. The IPA’s Mark was not a big fan of, but the Gose and Berliner style beers and the Introspection were really good.

They have a pretty decent sized tasting room. It wasn’t too crowded when we were there, we showed up right at 12:00 when they opened on a snowy Saturday. Shortly after, people began to stream in.

They are located in a small strip mall across from the Mill in downtown Newmarket. We went to Panzanellas’s after sampling to eat. The moved into the newly constructed strip mall to double thier space, they have been opened in Newmarket for 13 years.

As always, check Facebook for their most up to date info and hours.

Here are some special release beers we have tried over the last several months. All of them are NH beers, and most are not available anymore, but still an interesting read.

A heavy style Belgian beer, red in color and flavor, Belgian base with lots of flavor. Mark enjoyed it, Megan did not. 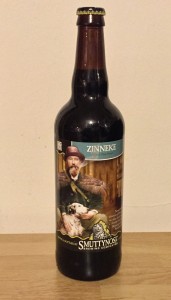 Complex flavor. A dark, robust taste with a roasty and malty flavor, all built over a dark Belgian base.

That’s what’s on the bottle, and that’s what it taste like. A light style wheat beer, a tartness, not overly sour, with a coriander taste and a slight salty finish.

This was a Smuttlabs collaboration brew with Stoneface and Great Rhythm Brewing. Mark had this on draft and several bottles. Hoppy with a hint of citrusy smell. Medium body with slight bitterness or malty taste. Very good overall beer, too bad it’s a special release. 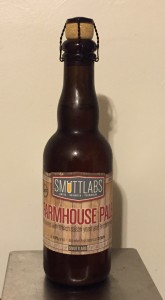 Really light in body, definite Saison taste/ finish. There is a little tartness to it which compliments the Saison nicely. We both liked this better than the Daily Brett.

Smells like a sour but only has a slight tartness to it. The tartness fades quickly and you get more of the malty  beer flavor. Medium body with a with a slight off taste. We were hoping for more sour. 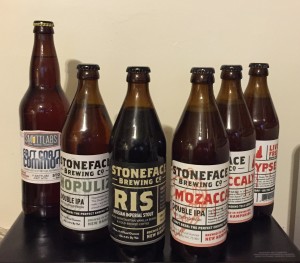 Hopulization – Double IPA – 8.9%
Smells of hops. A malt flavor base with lots of hoppy after flavors. Definitely a strong, hoppy beer. Good beer, and definitely worth trying if you can, but not quite as good as the regular IPA.

Hopulization was first released in late October, then again in late January, with the RIS in between. 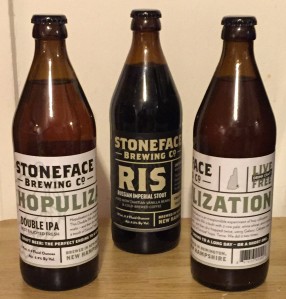 It’s been a while since we had a taste, we were holding onto the bottle for something special, I guess. They have bourbon barrels that they are aging another batch in, hopefully we get our hands on some of that, too.

This was a really good beer. Great taste, bright, smooth flavor. This beer was double dry-hopped with Mosaic & Azacca hops. Hopefully they consider bringing this back. Update: They brought it back! We wrote this after the first growler-and-keg-only small release.  Then they did quite a large bottle release, and 2 weeks later still had bottles and then offered growler fills.

What have you tried recently that is worth sharing? Let us know here or on our facebook page!