We visited Burnt Timber Brewing and Tavern this past September after hiking in the area. They opened this location in September of 2017. They have been brewing since 2015, but previously had just been distributing wholesale with no location to visit.

This is a 24 seat brewpub. A brewpub is basically a brewery that serves a full food menu. They brew in the basement and use a 1 barrel system, which is pretty small. That’s only 31 gallons of beer per batch. 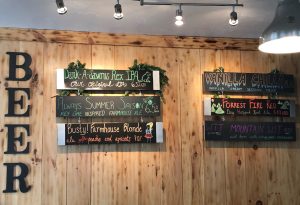 They serve full pours as well as flights. We got 2 flights so we could try them all, and over lapped on a few samples.

Busty Farmhouse Blonde
ale with peaches and apricots     7%
A very strong Belgian taste, that stood out. Mark got a little bit of apricot flavor, Megan got more peach flavor, but mostly that belgian yeast flavor.

Wit Mountain Wit
wit with orange peel and coriander 4.5%
A very, very light beer with a hint of coriander.

Always Summer Saison
Key Lime inspired farmhouse ale     6.5%
This seemed to have more of a bitter lime flavor, or maybe too much lime, we did not like it. It could be that Key Lime gives such a different flavor than the lime we are used to.

Forest Fire Red
dry hopped red ale     5%
Light bodied red, malty and a touch sweet as a red should be, with a little extra flavor, from the dry hop we assume.

Dank-A-Sawrus Rex
original ipa     6.5%
A super opaque beer, smells super fruity. It is super light in body, no malt character or mouthfeel really, but is followed up by a nice, fruity hop profile. Pretty good ipa. 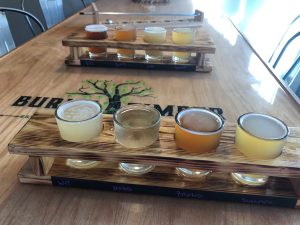 They have a small but varied menu with options. We just
ordered nachos because it was the middle of the afternoon. 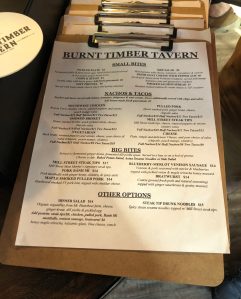 Cool artwork on the wall

View of the lakes from our hike nearby 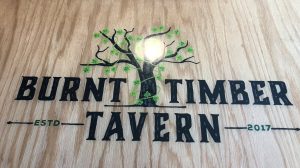 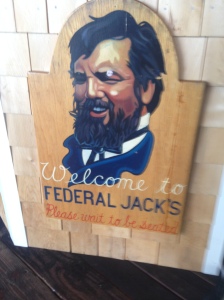 We visited Federal Jack’s Restaurant and Brew Pub, located right on the water in Kennebunkport, Maine during Bre’s birthday weekend festivities. We were headed to Old Orchard Beach to camp for this weekend, and this was at a good stopping point. It was also a good time to try to throw Bre off, because she didn’t quite know the full plan of the weekend… 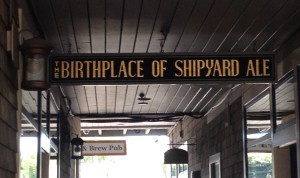 All beers at Federal Jack’s are brewed downstairs, at the 7-barrel brewery of the Kennebunkport Brewing Company. 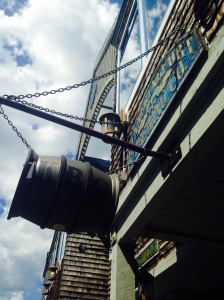 We ordered a sampler tray so we could try some of the beers we haven’t had before, and so we could share little tastes with everyone. 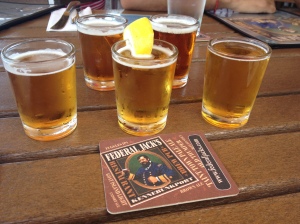 Samurai
Hoppy but light and summery

Sirius Summer Ale
Served with a lemon- delicious. Not a ton of flavor but a good summer beer.

Sunfish Wheat
Good flavor, grapefruit and peach. Smells like peach but tastes like grapefruit. Smell is a lot stronger than the taste.

Fuggles IPA
Not too crazy hoppy. Probably because it is single hopped with fuggles hops from England.

There was a group of us, so we ordered a couple of appetizers. 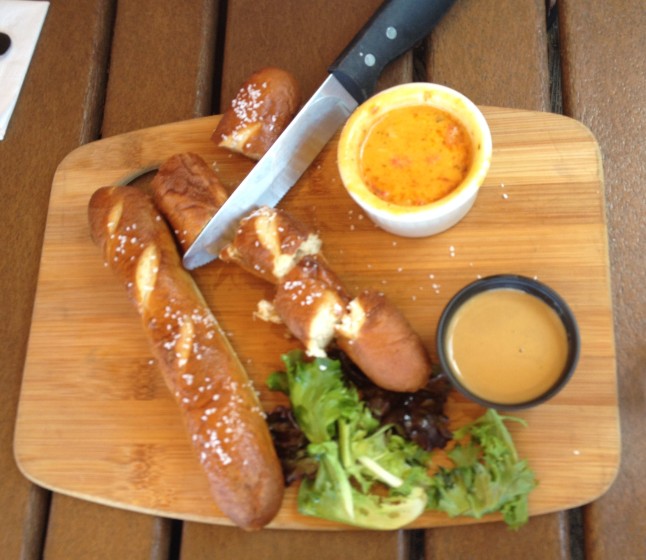 Deryl and Bre aren’t big beer drinkers, but they did like some of the lighter, summer beers.

Deryl ordered a pint of the Sirius Summer Ale. Bre went with a Frozen Strawberry Margarita. 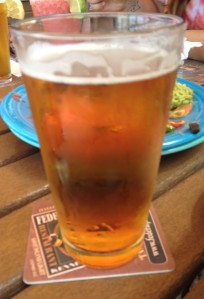 Mark ordered a pint of the Samurai. He liked it refreshing on a hot summer day, but also a beer that we haven’t seen in the stores around us.

Megan got a pint of the Sunfish Wheat Ale.

We visited at the end of the summer, so we sat outside on the deck. There is a really nice view of the water from the deck. 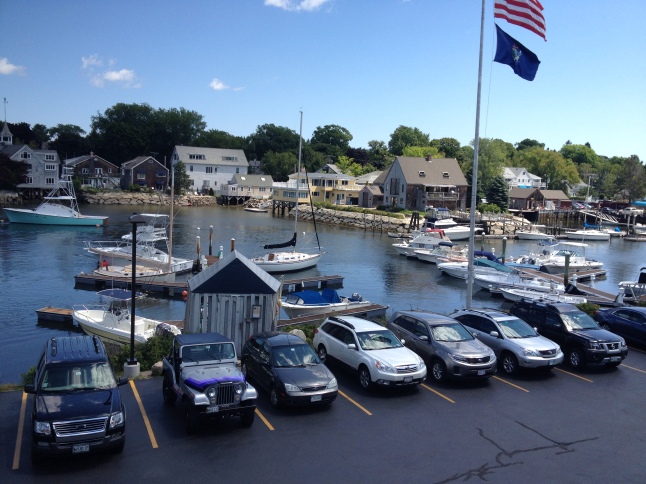 view from the deck 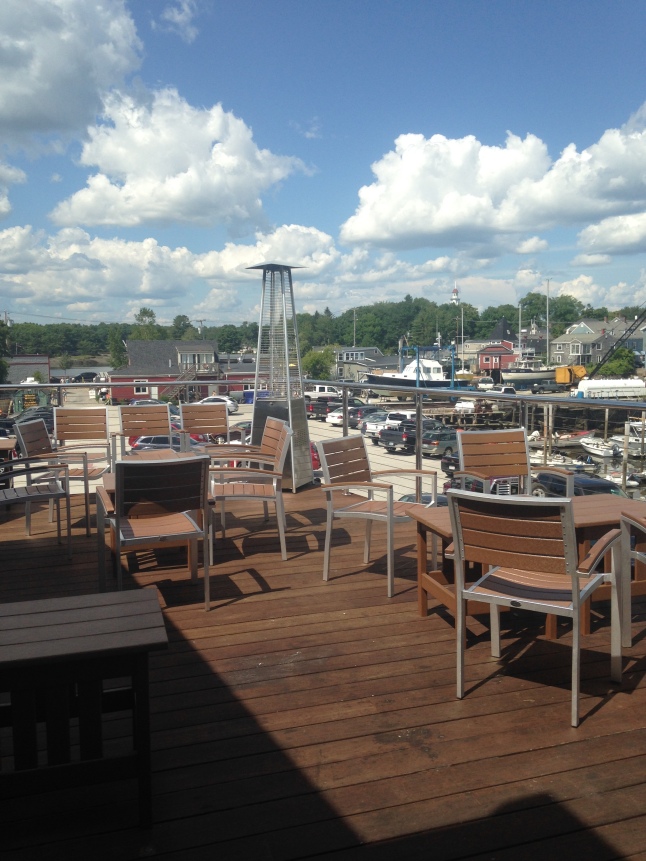 view of part of the deck

Megan got the Chicken Caesar Salad 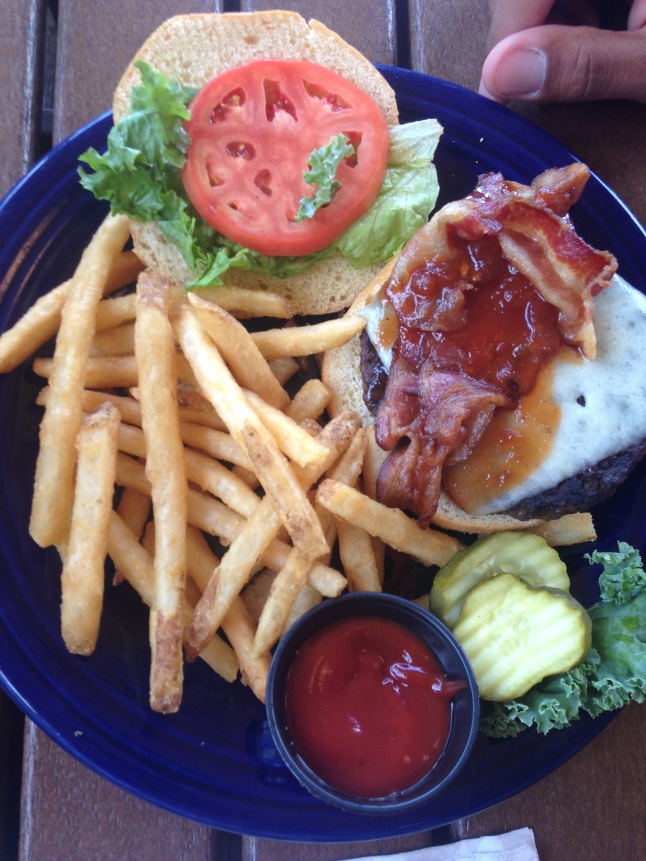 Mark got Fish Tacos, really good with an interesting sauce

Lizzie had the Caprese Sandwich 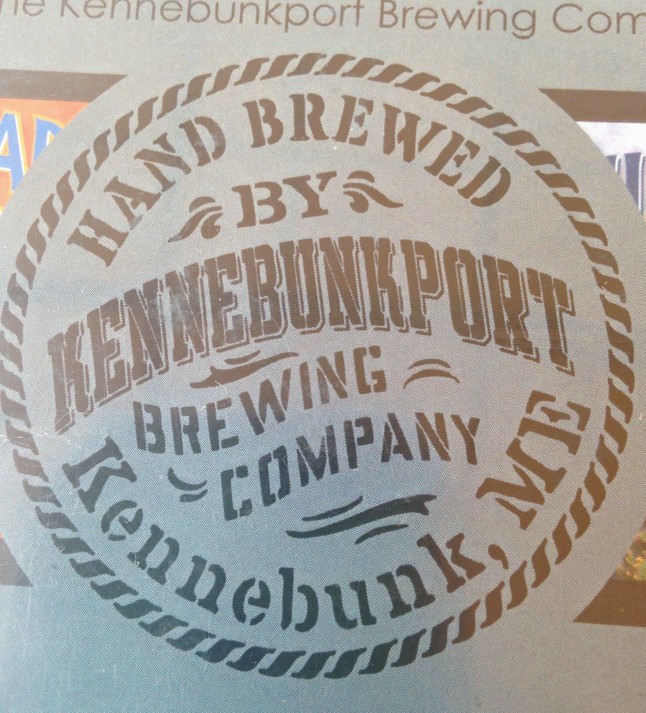 A brewpub on our list showed up on groupon?! Yes please. There was recently a group for Milly’s Tavern, located in Manchester NH. The groupon was for 1 tasting tray, 2 pints and an appetizer. Nice, inexpensive way to try out a new place and have/start dinner! 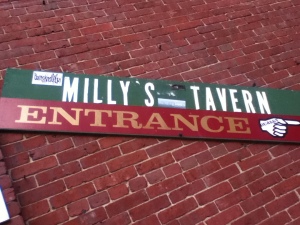 Milly’s Tavern is a brewpub, having at least 18 beers on tap at a time.

We went on a Saturday night, as we both had worked all day. When we arrived, we were uncertain of what to do, where to go. The bar and restaurant were set low, down a small flight of stairs. We looked around for a sign stating if we should wait to be seated or to seat ourselves… We must have looked confused, because the bartender came over and told us we could sit wherever we would like. We walked over to a high top table.

It took a few minutes for a waiter to acknowledge that we were there. Once he came over, we told him (as groupon tells you to), that we had the groupon. Bad move. More on that later. 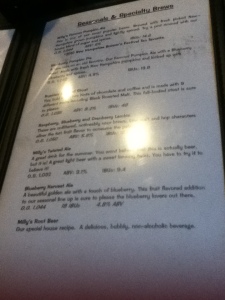 We were given a sheet of paper with six squares on it to write down which six beers we wanted to try. This was nice, because we had a choice. Many times a tasting tray is set for you, without giving you the option. We chose: Twisted Ale, Raspberry Hefeweizen, Pumpkin Ale, General John Stark Dark Porter, Manch-Vegas IPA, and the Oatmeal Stout. 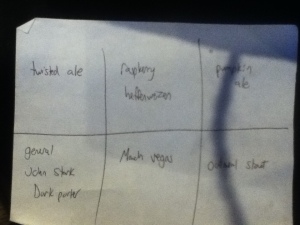 Our three favorites were: Pumpkin Ale (much better than Sam Adam’s!), Oatmeal Stout (very smooth), and Twisted (tastes of iced tea, lemonade and beer). I didn’t make the connection until much later that the Twisted was similar to a Twisted Tea.

Mark ordered a Pumpkin Ale for his first pint, followed by an Oatmeal Stout. I chose the Twisted for both of mine. 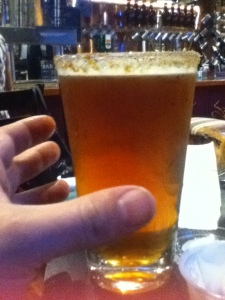 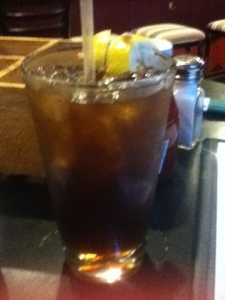 We ordered chicken nachos for our appetizer. We didn’t get them loaded because we (well I) tend to pick off most of that, and it was a ton of stuff that would be added. They were really good, and were devoured.

Following the nachos, we ordered one of their nightly specials, a Buffalo BBQ Chicken Pizza. It was sooo good (and of course I forgot to take a picture of it). The crust was perfect- light but fluffy and crispy all at the same time.

It took awhile to be able to order more drinks, and to get the bill. At the end of our night there, a heavy metal battle of the bands started- made me laugh. The singer made more noises then singing or yelling. Was very… interesting.

Although sites like groupon suggest that you tell the server you have a groupon, I have found that you are better off not. Typically, when I or others I know have told a server that we have a groupon or other deal, they disregard the table, expecting that they will not be compensated appropriately. We left a tip based on the total bill- including what we would have paid had we have not had the groupon. Although the service was not good, we wanted to prove a point that just because someone has a groupon does not mean you will not be compensated appropriately. We responded to Groupon when asked how our visit was, and let them know.  We did not hear back.