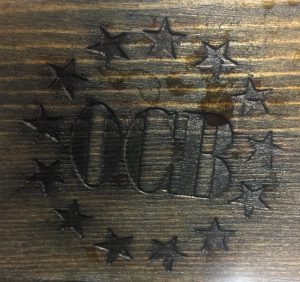 Old Colony Brewing is a nano brewery in Whitman, MA. We have tried a few of their beers before we actually visited them. Sam and Dustin like going there, as it’s close to them.

We met Megan’s sister Sam and her friend Lindsey there one evening in November. They serve 5 oz pours and full pints. They also have growlers and crowlers to go, and they just started doing limited runs of 16 oz cans as well.

Toll House Stout – 5.5%
A milk stout brewed with chocolate and chocolate malts. Good for a milk stout, more on the bitter chocolate side than a sweet milk chocolate flavor. With the Toll House name and billed as a ‘chocolate chip cookie stout’ we expected something sweeter and for it to somehow be more cookie like somehow. 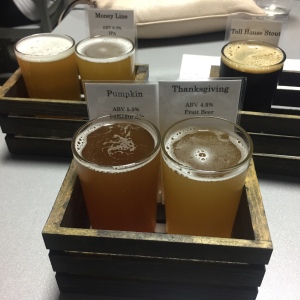 Thanksgiving – 4.5%
A wheat beer made with apples and cranberries. Taste like a wheat style beer with a sweeter than typical cranberry flavor, probably from the addition of the apples, pretty good.

Pumpkin – 5.5%
An ale brewed with fresh pumpkin in the mash. Megan thought it had a good balance of flavors, cinnamon, nutmeg and vanilla all present but not overwhelming.

Mark went back a second time with Dustin in January and liked Money Line IPA again, and thought the Toll House Stout was pretty good. 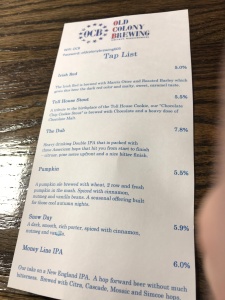 Snow Day – 5.9%
Interesting beer, a spiced porter. Better than Mark expected, cinnamon,  nutmeg and vanilla added some nice additional flavors to make this and interesting porter. Sam and Dustin have mentioned this beer a few times to us as well.

They have a short bar and a handful of tables, with plenty of extra standing room when crowded.

In the early Fall, we visited Framingham Beer Works in Framingham, MA. The Beer Works franchise has 7 different locations. Each location brews their own beer, while Lowell Beer Works does the bottling for all locations.

The Beer Works franchise seems to focus on seasonal beers. We have tried to visit during the different seasons so we can try as many of their beers as possible, at different locations of course.

We went for lunch with Megan’s sister Sam and her boyfriend Dustin. 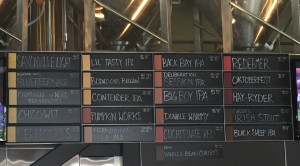 Curly’s Irish Stout
Good, pretty standard stout, a hint of roastyness, from the roasted malts they use.

Hay-ryder
Megan said it had an ok first taste, but the aftertaste was a little funny…

Oktoberfest
A very malt forward beer, decent taste, fairly light in body and not much bitterness. Megan thought it was too strong, too malty.

Pumpkin
Decent pumpkin beer, best beer so far. They did the brown sugar rim, which definitely added some flavor to the beer. 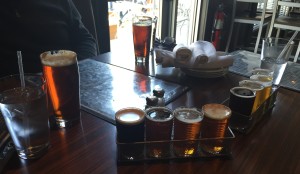 Sam and Dustin had just been to a Beerworks the week before, they liked the Pumpkin beer so they both ordered a pint of it.

Lil Tasty IPL
Not the best IPL we have had, but a pretty decent attempt. More on the bitter hop spectrum for flavor.

Deliberation Session IPA
Fairly light, again more of a bitter hop spectrum, not that bitter, but it was a session ipa so the bitterness is the major taste that stood out.

Cantander IPA
Much better IPA, has more of a tropical fruity hop flavor, not very bitter at all, Mark’s favorite beer this visit.

Black Sheep IPA
Bitter, with a smoky or burnt flavor that Mark didn’t like that much. Megan thought it had more of a toffee flavor.

Mark wanted to try another beer, so he decided to go for the:

Chapagne Du Nord – Berliner Weiss
A sour, tart taste. That’s all it really was though, just sour with nothing much else behind it.

We ordered nachos as an appetizer and it was pretty good.

We all ordered burgers for lunch as well, and they were pretty good. We ate them too fast to take a picture!

Our visit this fall was not that impressive, compared to former visits. The beers were just ok, nothing we were very impressed with. When we visited Boston Beer Works, Fenway Park location, the food and service were good and the beers were pretty good. Our best visit was when we went to Lowell Beer Works a year and a half ago, over the summer. Good food, good service, good summer beers.

Is there a Beer Works near you? 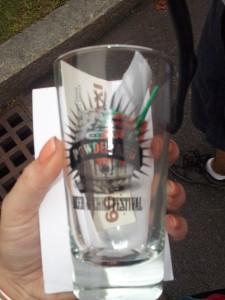 This weekend, Mark and I went to the Powder Keg Beer and Chili Festival, located in Exeter NH. Outside the festival, was a small fall festival with a lot of children’s activities. It was nice to walk through to get to the Powder Keg.  Before entering the Powder Keg, we had our IDs checked, and received an “over 21” wristband. We were also given a map and list of what breweries were there. We then had our tickets ripped and entered. We were told to hang on to our tickets so we could come and go as we pleased. After we walked through the gate, we realized that we hadn’t been given glasses or tickets and realized the table to pick them up was to our right. We both received our glasses from a volunteer and started to walk away. We hadn’t walked too far when I realized my glass didn’t have tickets in it, but Mark’s did. I went back to the table, and at first they were uncertain what to do, but trusted that I was not given tickets and I received them. Thank goodness! We received 8 beer tickets and 5 food/chili tickets to start with; more were available for purchase. 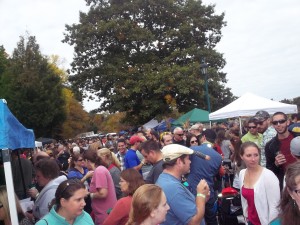 The beer notes will not be very detailed, as most are places we will go to or have gone to already.

The beers we tried: 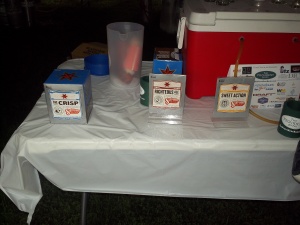 603 Brewery, Campton (soon to be Londonderry)

The Chili we tried: 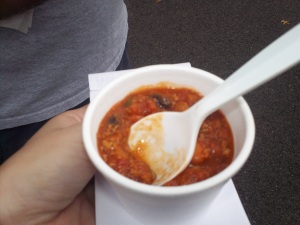 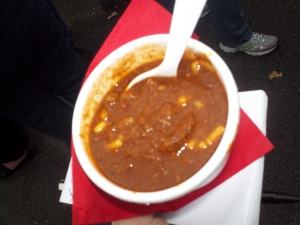 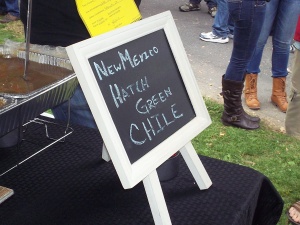 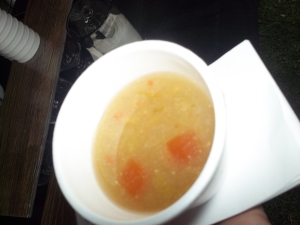 On the Vine Marketplace, Exeter NH 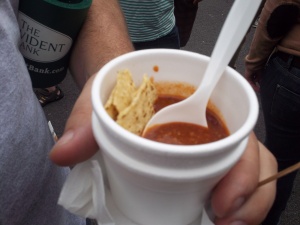 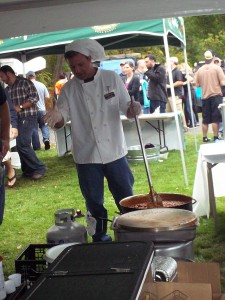 This is an event to go to. Just plan on eating your chili early!

Although I have looked at the beer/brewery page for the Exeter Powder Keg Beer & Chili festival before, I just took another glance and am very excited to try some new beers! The event is this weekend, from 12-4pm, Swasey Parkway, Exeter, NH. View the beer list here or read on!

A sampling of what I saw on the website:

The Holy Grail Restaurant and Pub

Curse of the Rye Wolf

#9-Not quite Pale Ale

Gruit Beer (to be announced)

Feeling thirsty and want to join the festivities? Buy tickets here!  I am very excited to try some of the beers that I have seen or heard of, but haven’t tried, as well as beers that are new to me!