Mark and I recently went on a Granite State Growler Tour. 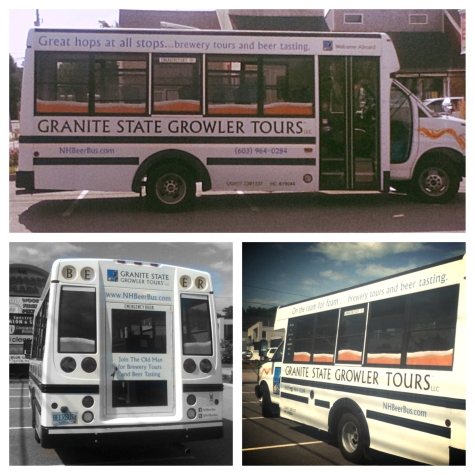 Greta the Growler Getta, aka the tour bus

The tour currently leaves from Hampton, NH. Once you step on board “Greta the Growler Getta,” you are brought to 2-3 different breweries as well as a distillery and a great craft beer store. You are provided with fun facts about the Seacoast New Hampshire area, a delicious homemade pretzel, a cooler full of water, and a cooler to hold any growlers you may purchase along the way. Why pay to do a Granite State Growler Tour? How else can you visit multiple breweries and/or distilleries in the same day (without having a DD),  get some great discounts (more on that later), learn some fun facts about the history of beer in New Hampshire, and maybe make some new friends.  You also are able to interact with many of the brewers, and get special attention from them due to the tour occurring when most of the breweries are closed to the public.  Depending on what they are working on, you also might have the option to try something new, that is still in the works or not bottled yet for public consumption. It was great to have a basically care free day, with the ability to make many visits without having to worry about one of us driving.

We went on the “Sunday Driver” tour, which consisted of visits to: Earth Eagle Brewings (Portsmouth NH), Sea Hagg Distillery (Hampton NH), Top Shelf Brews (Hampton NH) and Blue Lobster Brewing Company (Hampton NH).  When we climbed onto the bus, we filled out waivers, and were given “Tasting Notes” (to keep track of any notable beers- see below), 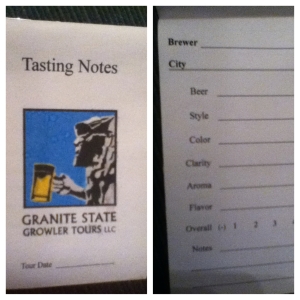 star stickers (to label growlers), a coupon to use on a future visit to Top Shelf Brews, and a homemade pretzel (made with Blue Lobster- Excess Is Not Rebellion IPA). We were also notified that if we went to Community Oven (also in Hampton, where the tour begins and ends), we could purchase a 20oz beer for the price of a 16oz beer after the tour. The tour started with introductions- we found out that David (owner and driver) and Mark (partner and tour guide) have known each other since third grade! 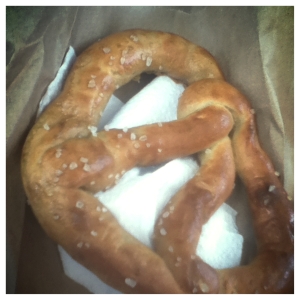 Oh! I almost forgot- you also receive a name tag at the beginning of the tour, to not only make sure you stay with the group, but to guarantee any of the stops know you are with the tour for any additional discounts, or special access. 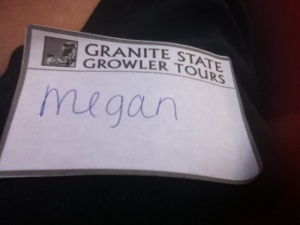 Mark, the tour guide, really knows his history. He told us a lot of great information about the area, both beer history and otherwise. Although Mark (the boyfriend and co-author of this blog) and I did not know a lot of the area’s history prior to, we also feel that those familiar with the area will enjoy it as well- I shared some of the stories with co-workers and they hadn’t heard the stories before.

Did you know that Portsmouth is the third oldest establishment in the United States (after Jamestown and Plymouth of course!). Things were different in Portsmouth from the beginning, as they came to reap the benefits of the new world, and immediately began to brew beer from their surroundings. Spruce tips, strawberries and apples were all used to make beer, basically whatever they could get their hands on. Settled in 1630, in 1642 a tavern was established. Portsmouth was allowed to have 6 taverns, although most towns were strictly limited to 2.  Only upstanding individuals were allowed to operate taverns, and they had to pledge to not serve to Native Americans or slaves. I would love to share some more of their stories now- but I want you to have something other than delicious beer and rum to look forward to! 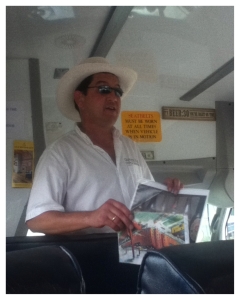 The stops we made:

Earth Eagle Brewings: Located in Portsmouth, NH, also runs a home brewing store (A&G Homebrew Supply), which we had a tour of and received some great information about the brewing process in. They operate a one barrel brewery, so the beers are always changing and never quite the same. They make a type of beer I was not familiar with until now, gruits, which is beer made without hops.  See my post about Earth Eagle Brewings here!

Sea Hagg Distillery: Located in Hampton, NH creates true, colonial style rum.  It was started by a couple who thought of the idea while on vacation in the Caribbean. Rum is a true New Hampshire item, as it was written in every town budget in the 17th and 18th century. See my post about Sea Hagg Distillery here!

Top Shelf Brews: Located in Hampton, NH is a craft brew store. One of their biggest draws is that they do mixed six-packs. Mark and I bought a mixed four-pack, of four beers and ciders we hadn’t tried before but looked interesting. Great store to go to find a new craft beer, or that hard to find beer.

One of the great things about Granite State Growler Tour is that they are willing to go the extra mile, and do private events of any location. Both David and Mark are interested in beer, and like making new connections as well as (on their own time) trying new beer. Who knows? Maybe we will join them on a future tour, elsewhere. to cross other breweries or wineries off our list!

Mark and I purchased glasses at each stop, as well as a glass koosie at Sea Hagg. 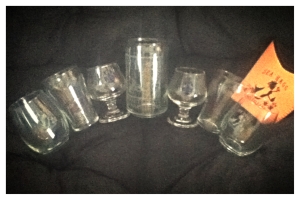 I also won a glass on the tour! 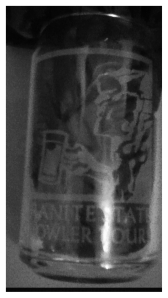 We also went home with a growler of Sage Goose from Earth Eagle Brewings. Thank you to Granite State Growler Tours for keeping it cold for us in the cooler while we enjoyed the rest of the tour! 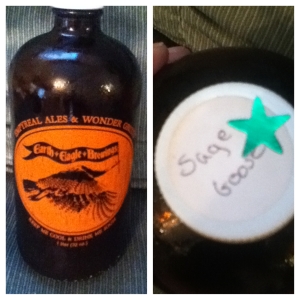 The sticker on the Sage Goose top is the star sticker we were given at the beginning of the tour- so we could mark the growlers we took home.

Another great thing, is that the tour begins and ends outside of the Community Oven, located in Hampton NH. The Community Oven will hold a table for any in the tour that would like to continue drinking or want something to eat after the tour. David happened to have a coupon for a pizza, so Mark and I couldn’t argue about it- we had to try out The Community Oven! 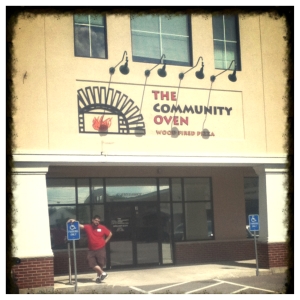 Mark outside of the Community Oven 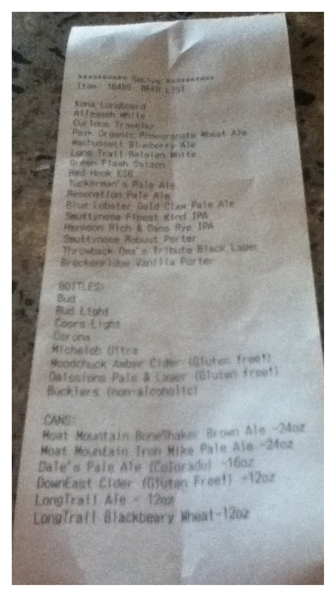 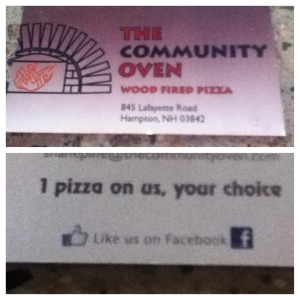 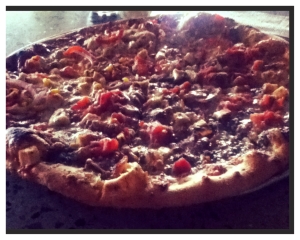 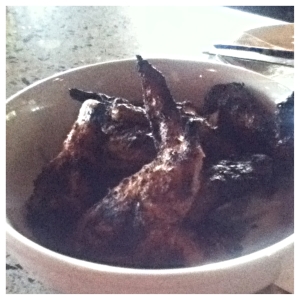 Want to go on a Granite State Growler Tour?

Venues and times are subject to change even during the tour

Venues and times are subject to change even during the tour

Go here to register for a tour!

We recently stopped at the Cape Ann Brewing Company, located in Gloucester, MA.

From their website: “Fisherman’s beer — whose bold flavor and character reflect the spirit and courage of the sailors of the North Atlantic fishing fleet — is a tribute to hard work and a salute to friendships that endure.” 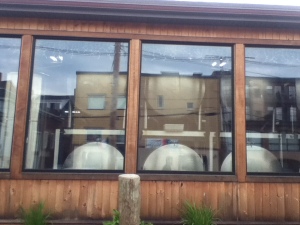 a look at the brewery from outside 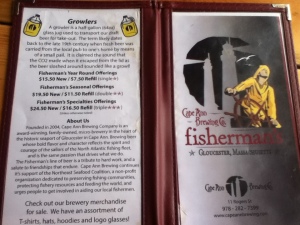 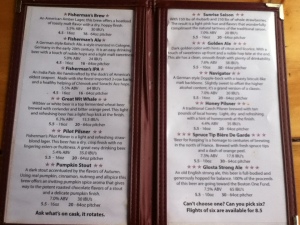 We arrived wanting a snack, and to try new beers. They had a few options- we could each buy a pint, or a flight of 6. We chose to purchase two flights of 6, so we could try all of their current offerings of beers. 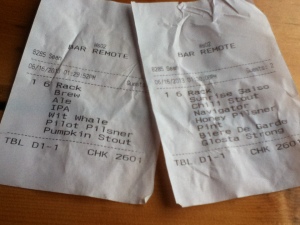 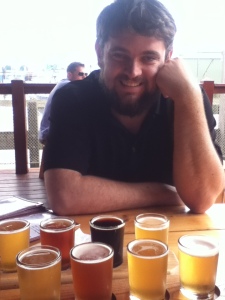 Mark with the beers 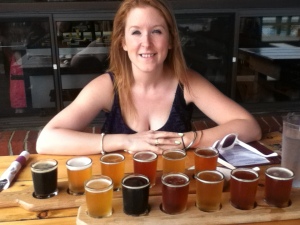 Me with the beers

Fisherman’s Ale: I wasn’t a fan of, but Mark enjoyed. 5.0% ABV. A German Style Kolsch Ale. Easy drinking beer with a touch of noble hops.

Fisherman’s Great Wit Whale: tastes like I would expect it too. Very refreshing. 6.3% ABV. Light and refreshing, brewed with coriander and orange peel.

Fisherman’s Sunrise Saison: great flavors of strawberry and rhubarb. 150# rhubarb & 250# strawberries! 7% ABV Rhubarb toned the strawberry down, to make it refreshing versus overwhelming.

Fisherman’s Chili Stout: Perfect undertone of chili. Second time around, tastes of chocolate. Reminded me of chocolate-chili truffles I made. 5.4% ABV Brewed with both jalapeno & habanero chilies.

Fisherman’s Honey Pilsner: was an interesting combination, especially after having had honey wine (mead, at Moonlight Meadery).  Sweet honey wasn’t overwhelming, but made you think about the beer you were drinking. 4.6% ABV. Made with 20# honey.

Fisherman’s Spruce Tip Biere de Garde: spicy. Smelled and kind of tasted like the holidays without being strong or dark in taste. 7.3% ABV, brewed with spruce tips and orange peel.

Fisherman’s Glosta Strong Ale: typical strong ale. The big deal about this beer was that 100% of proceeds of this ale are going to the Boston One Fund, which made me want to try it even more. 7.5% ABV. 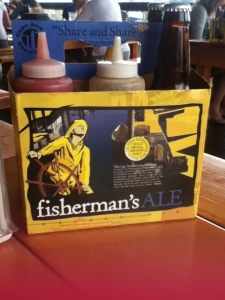 Fun way of holding condiments on the table. 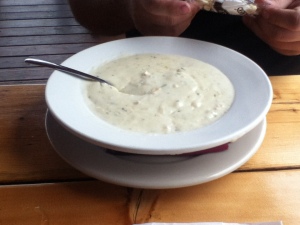 Mark ordered clam chowda, he said it was really good- clams were ground up 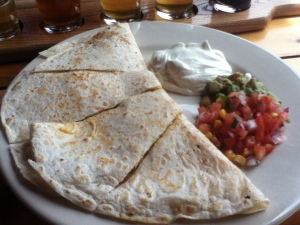 I ordered a chicken quesadilla 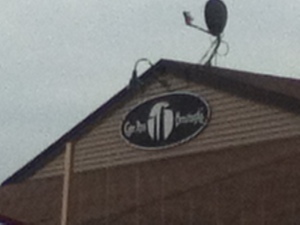 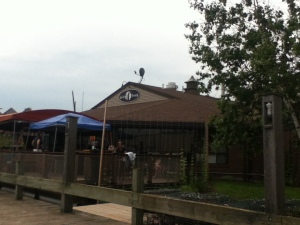 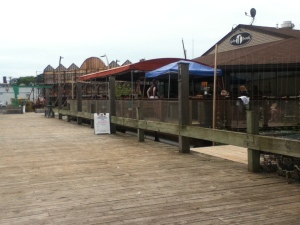 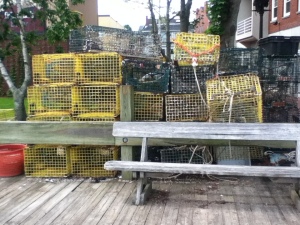 We had sat on the back deck, after eating we went out and took pictures of the area 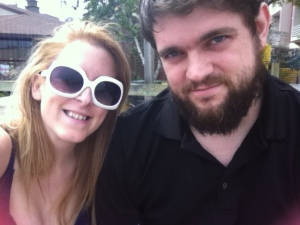 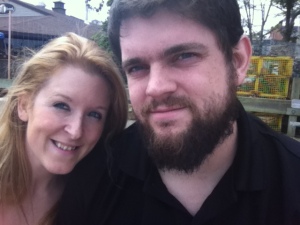 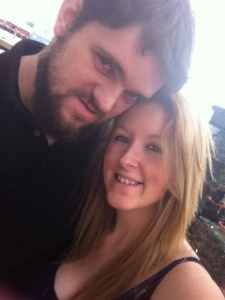 Fun taking photos outside after 🙂