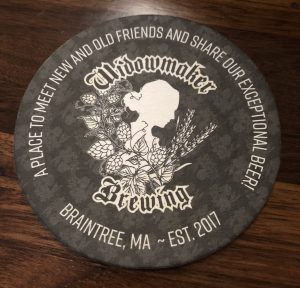 Widowmaker Brewing is a fairly new brewery in Braintree, MA. They opened in September of 2017. We visited with Megan’s sister Sam and her fiancee Dustin, and our friends Nick and Sara, their first official Brew Wine Fun visit, wow! 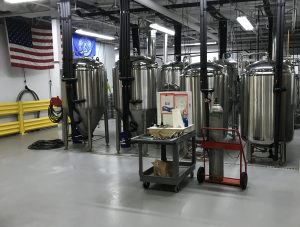 Widowmaker Brewing is a 7 barrel brewhouse. They have a lot of room and we saw a lot of fermenters. They also have a huge tasting room, especially for a new brewery. 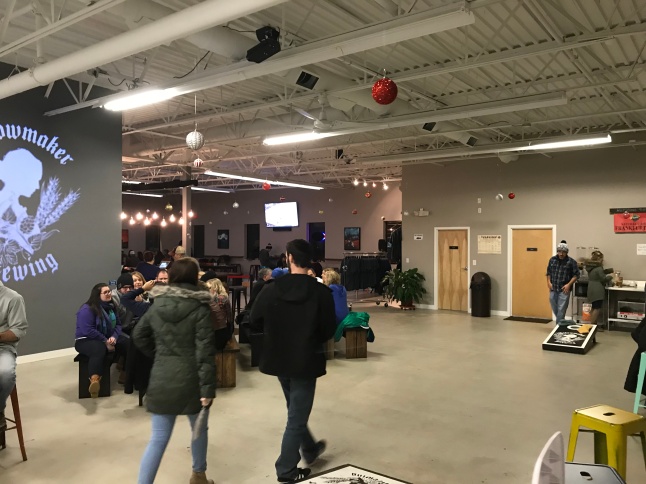 Big pictures so you can see the big tasting room

They serve half pours (6.5 oz), full pours (13 oz) and also serve flights of four 4 oz tasters. We all got flights so we could try as many beers as possible. 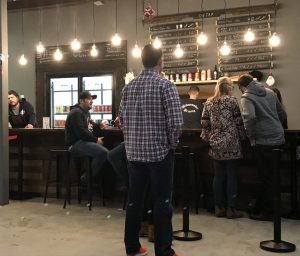 Donut Shop – coffee stout     6.5%
This beer is dominated by a bitter coffee flavor, Mark and Sam expected a sweeter or more chocolatey beer with name like donut shop, but if you ignore the name it is a pretty decent coffee stout.
Pure Hoppy – american ipa: citra     7.2%
Hazy, pretty juicy citra hop flavor, this was good, exactly what Mark was hoping for. 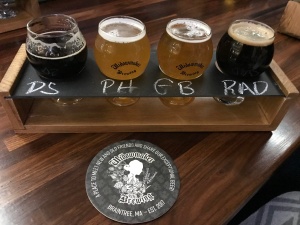 Greenbush – pale ale 6.8%
Not quite as good as Mark was hoping for, it is 80% Mosaic hops, lacking a little, maybe the ‘dry finish’, or just not as good as the Pure Hoppy: Citra in Mark’s opinion.
Nick didn’t like WMB Octoberfest that much, though it did grow on him as he drank it, Sam and Dustin did like it.
com-Rad – russian imperial stout     10.1%
We liked this beer, it is based on the Donut Shop stout recipe. It is slightly sweeter, definitely more chocolatey, with a strong coffee flavor. 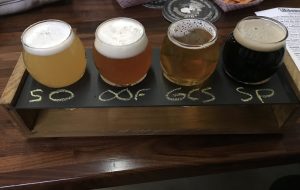 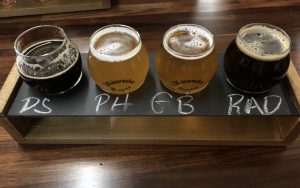 Old Oaken Farmhouse – saison     8.1%
Funky smell, which is a good sign. Strong peppery saison flavor up front with a nice mild finish. It’s hoppy which balances the saison flavor nicely. Described as a hybrid saison pale ale, and it tasted like it.
50-Year Storm – american dipa     7.8%
Hazy, really opaque. Good beer, has a super light malt bill with an oated body, hoppy and tasty with no hop bitterness. 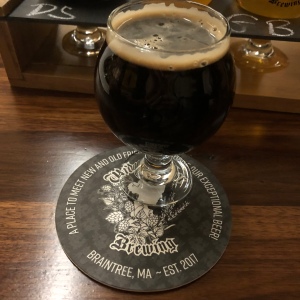 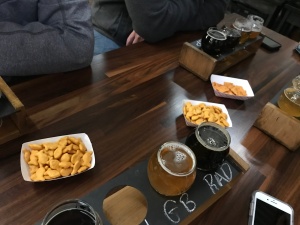 Free snacks! Goldfish and Cheez-its with little trays to bring them back to your table.
They have Crowlers to go, and it says on their website they will have a limited runs of bomber bottles, but we don’t think that has started yet. 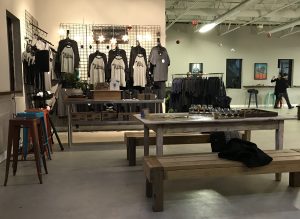 Overall this was a good visit. They had beers that everyone liked, they have a nice, big space they can grow into. It should be interesting to watch what happens here. 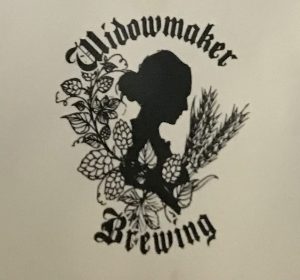